Smarter Than Your Average Dog

The Border Collies were at the top of the list. This was no surprise because we all know that Border Collies (#1) are the ultimate overachievers. They race triathlons and assist in animal husbandry while solving differential equations in their giant doggie brains. At the bottom of the list were the Afghan Hounds (#79), a breed so estúpida in la cabeza that it occasionally needs remedial instruction on how to lick its balls.

Some dog rankings were unexpected. Who knew that a Corgi (#26) beats the pants off a Samoyed (#33) in the smarts department? Other rankings confirmed what we all believe; for example, Golden Retrievers (#4) are not just fluffs and shedding machines with the brains of your common or garden variety of blonde or ginger, they are also quite intelligent. That may account for the knowing smile the GRs always have on their faces.

Maltese ranked 59th, tied with the  Griffon Bruxellois, a breed that looks like Chewbacca after a long cleansing fast and exists only in the tortured minds of the beer-brewing monks of Belgium. As proud parents of a Maltese we had hoped Max would score higher but were satisfied to know that our pooch outranked his buddies at the condo who are Chihuahuas (#67), Lhasa Apos (#68) and Shih Tzus (#70).

Sadly, Max’s arch enemy, a Bichon Frise – which we of course pronounce as “Bitchin’ Frizzy” – is a canine Stephen Hawkins at number 45.

The Intelligence of Dogs does not account for the darker side of dog brains, the manipulative skills that they use to twist us into being their servants. Were this factor assessed, the Maltese would score higher. While your average German Shepherd (#3) is thinking about Wagnerian opera and your Poodle (#2) is parsing irregular French verbs, your typical Maltese is mastering the art of the cute butt wiggle to separate you from the nearest dog cookie.

If you have a brilliant breed, make sure you provide intellectual stimulation. Toss in a few organic chemistry quizzes, ask her to compute cosines and challenge them to explain Obamacare (#666). But if you are one of the small dog folks walking the K Streets…neener, neener, neener…my dog is smarter than your dog. 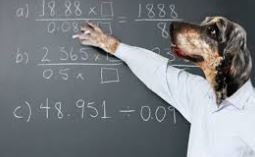