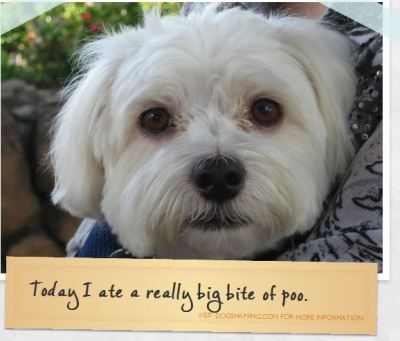 Many of you may be familiar with the Dog Shaming website, a canine rogues’ gallery of pooches who have transgressed the boundaries of acceptable dog behavior. Some of the sins are venal – a golden retriever who never retrieves gold – and some are mortal like the Labrador that pees in the kiddie pool.

Each perp in the gallery is posed next to a sign that describes the offense and the guilt on each dog’s face is worth the visit.

Today, Max joined the Hall of Shame. It started as a typical visit to Maxie’s Park  on a day when heavy clouds swelled along the Koolau Mountain ridge threatening a downpour. Max was in good spirits, darting around the area and racing back and forth between my wife and I, begging small treats at each pause.

Then, Max took off for the row of coral bougainvillea that line a wall. It was clear he was being drawn by something. His head pushed under the lower branches and we saw that all too familiar movement that indicates he was munching on something. Now, I need to pause and let you know that Max will eat anything and despite our best efforts he will not heed commands to “drop” if that means food will hit the ground. So we are always chasing after him to assure he doesn’t scarf up something nasty.

Today, he did. The worst. The nastiest. Today, my best buddy ate poo.

I won’t go into the most gruesome of details except to say it had a horrible smell. So much so that we instantly grabbed him, carried him back to the car, bundled him inside and drove straight home. Of course, it was then he decided to become very affectionate and try to lick us causing screams and swerving because of dog breath that would offend Satan. Real gag-a-maggot stuff.

At home we brushed his teeth twice. He got a real scrubbing in the tub including a washing out of that mouth. Finally, he got one of those chlorophyll pet treats that are reputed to freshen breath.

It seems to have worked and his breath is again minty fresh. But there is no way I’m accepting any doggies kisses for a long, long time.