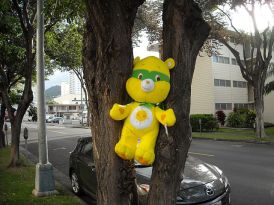 Give me all your money or I’ll stick my head in a honey jar and cry for Christopher Robin.

Apparently the Blood Moon of a couple nights ago seriously affected the Pooh Bear population of the K Streets. Otherwise, how to explain the strange creature that was perched in the tree outside Max’s condo home? Even with the mask it appeared harmless so we simply passed by on our morning constitutional.

We knew that Uncle Fish was unavailable today so we took a slightly different route. It passed by a local beauty store that caters to predominantly Korean clients and sells products not often seen at the cosmetics counter in Macy’s.

“Tomatotox.” Recommended by The 3 Fruits for a flawless complexion.

Here, for example, we have the famous Three Fruits line of skin care. OK, I suppose fruit acids are good for the complexion but I question the wisdom of identifying a trio of young male singers as the “Three Fruits”. That doesn’t seem to be a career enhancing moniker but maybe that’s just me. After all, the “Three Tenors” was already taken.

I’m not feeling the aloha at NetCafe.

I suppose one could build an entire repertoire around the “three” meme. Three Fruits singing Three Coins in the Fountain with back-up vocals by the Three Wise Men and a dance performance by the Three Blind Mice and…I’ll stop now.

Next along the way we peeked into the windows at NetCafe. The front door didn’t give much love to potential customers.

Not at all like the small eatery next door where the hi-jinks were out of control on this Wacky Wednesday. Admit it, your Wednesday is never this wild and crazy. I mean, really, we’re talking a buck off shrimp all day every Wednesday. Can you imagine? Me neither.

Perhaps you’d like to dress up a bit as you gnaw your way through discount oysters? Well, we can certainly handle that in the K Streets.

No need to limit oneself to the usual aloha attire. No, we K Street denizens are citizens of the world, in evidence of which we present to you  the “Surf in Paris” tee shirt. 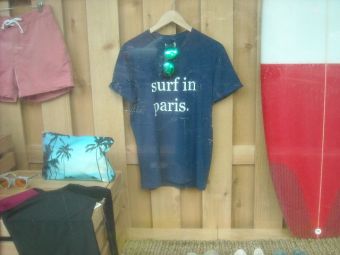 When it comes to hanging ten, getting gnarly, waxing up the tanker and hitting the big waves, few will immediately think of Paris. One supposes a strong tide on the Seine might generate a small curl though I doubt anyone would survive immersion. Perhaps our good friend Helen Devries (author of the estimable A Surfeit of Palfreys blog) or her group of international correspondents will chime in and report on the typical surf conditions that one might expect in the City of Light.

Finally, we turn the corner and spy Don Quijote, a popular store in the K Streets. Folks from the mainland often chuckle about the store’s name.

It’s actually a well known,  160-store Japanese chain that sells everything from fresh octopus to televisions and anything in-between at discount prices. It does about $6 billion in annual worldwide sales. Folks casually refer to the store as “Donki” and, yes Sancho, there are hundreds of name related jokes. 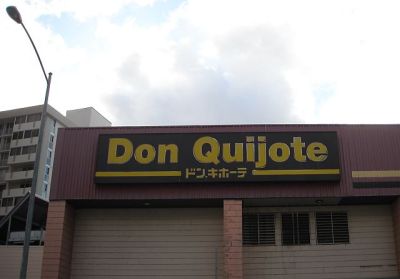 The store layout is beyond bewildering; think Wal-Mart on LSD. Imagine goods packed to the rafters and narrow aisles with weird product adjacencies such as garden pesticides located next to the wine section.

In years past, some of the Japanese Don Quijote stores suffered arson attacks and the company was harshly criticized because its store layouts made it difficult for shoppers and even employees to identify the exits. One of the Donki stores in Japan is also known for a roller coaster that it built on its roof but then never operated. A strange but fascinating retailer.

While shopping you’ll often hear “Miracle Shopping,” the theme song performed by Maimi Tanaka, a Don Quijote store employee. The effect of non-stop repetition of this ditty on shoppers is similar to what happens to folks trapped on Disney’s Small Small World ride. The ear worm of death.

You’ve been warned but since we’re all adults, here is a link to the song with lyrics translated into English. The singing is preceded by simply abominable screeching in Japanese which must be avoided to preserve sanity. The actual catchy tune starts at the 25 second mark. I hereby disclaim all liability for damage to your ears, brain or psyche.

A final note on Donki: if you choose to live dangerously and watch the YouTube song video linked above, note the product advertised on the right side of the screen at the 25 second mark. Yes, that is indeed a “Boobies Towel”. Is this a great store or what?