Small dogs, available in a variety of colors and sporting leashes of gender appropriate hues. (r to l) Bijoux, Luna and Max kicking back.

Bijoux is the black miniature poodle. She will be 7 this year, the same as Max. Luna is the golden poodle and she’s about 9 years old. Ooh, an older woman and French, too.

The pretty poodles have been play time and pee-mail pals of the Malt for about three years. He’s always thrilled to see them; even better when the duo is accompanied by their human Mom who is a reliable source of some of the best dog treats in town.

The always impeccably groomed Miss Bijoux is a bona fide starlet. She appeared in the movie “You May Not Kiss the Bride” which was partly filmed in Hawaii.

To check out Bijoux’s performance, you can download part 1 of that movie from YouTube or, hey big spender, rent the whole movie for a couple bucks. (Full disclosure: chick flick, cough.)

You may, however, kiss the poodles.

Miss Luna is a rescued poodle whose gentle demeanor and overall cuteness belie a life that was miserable before she was adopted.

Hawaii readers will remember the 2012 case of the Waimanalo puppy mill that ultimately resulted in the evil operator being charged with 153 counts of animal abuse.

Luna was one of the victims but then fortune smiled on her and she became Bijoux’s sister. She is now one happy  and well loved little dog.

You may have noticed that most of Max’s friends are lovely lady pooches.

Yup, he is a pretty smart pup, just look at that grin. 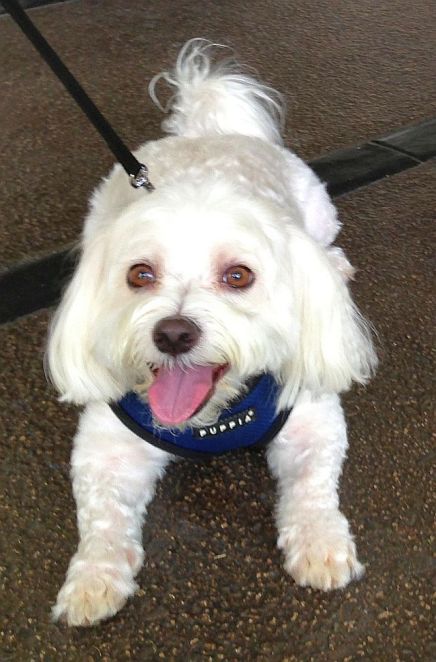