A Visit to the Oligarch’s Boat

Friday the 13th seemed as good a day as any to take a short excursion to downtown Honolulu and make a visit to the harbor area.

Join us on our jaunt to one of Max’s favorite hangouts!

The name of this pretty boat is “A”.

For the past few weeks it has been berthed at Aloha Tower.

A is owned by Russian oligarch Andrey Melnichenko and his wife, the ever lovely Aleksandra, hence the single letter naming conceit although rumor suggests the odd moniker may have been bestowed so that this yacht will always have primacy in the directory of the world’s most costly personal water craft.

Ego has a lot to do with the ownership of mega yachts, dontcha know. Yes, indeedy. 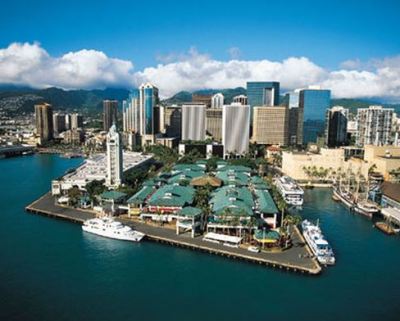 Aloha Tower and Marketplace where one may find both oligarch’s boats and good beer.

Andy, as I like to call him without him being aware of my existence, is 42 years old and is reputed to be worth $12 billion give or take a few rubles. He made his stash in banking, chemicals, power generation, commodities and other oligarchical activities such as peasant hunting and serf surfing.

While Andy’s net worth is exponentially higher than the limit on my Capital One card, he is a piker in comparison to Hawaii’s other oligarch, Larry Ellison, who bought the entire island of Lana’i without even cracking his HELOC.

Those wacky kids saved a bundle when painting the ship’s name on the ship’s butt.

Andy’s wife, Aleksandra, is a former Serbian model and pop singer. When those crazy kids (let’s call them A&A) were married in the South of France in 2005, Whitney Houston, Julio Iglesias and Christian Aguilera performed at the event. My invitation was apparently lost in the mail.

The boat is immediately recognizable from its unique and sleek design – it leaves virtually no wake at 25 knots. As the wiki notes, the ship’s lines have evoked comparisons with submarines and stealth warships, while commentators have referred to it as the “most loved and loathed ship on the sea”. 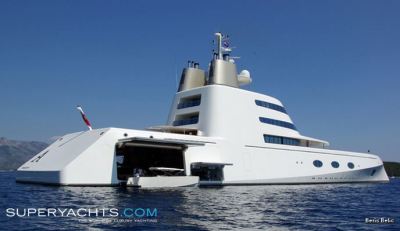 “Darling, be a dear and get the runabout out of the garage.”

Although this is considered a relatively small mega yacht, this floating example of excessive consumption is currently valued at about $360 million which places it about #4 on the list of most expensive yachts.

For all that cheddar you get a boat that has Baccarat crystal tables, wall coverings crafted from white sting rays and crocodile leather furniture. You also get 3 tender craft, a helicopter, 3 swimming pools and a partridge in a pear tree. Just kidding about the bird.

Being an oligarch is not all fun and games so A is also a high security retreat with thick, bomb-proof glass in the windows, armored walls, over 40 cameras, motion sensors, biometric fingerprint/keypad entry for restricted areas, a weapons system and an escape pod in case of emergencies. 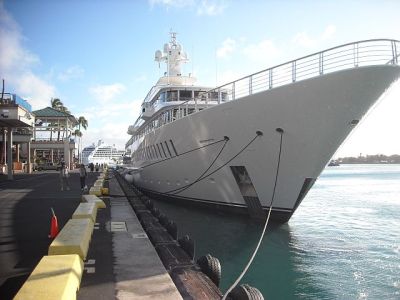 The “Musashi”, Larry Ellison’s ship at Aloha Tower. The tiny figures on the dock are Wifey, #2 Daughter and Max.

This may sound like big bucks and high times to you and me but keep in mind that there is a whole other level of spendy: the world’s most expensive yacht “Azzam” will set your Visa back $627 million.

Anyway, in a crass attempt to elevate our social status, Max and I decided to pay a visit to the yacht.We didn’t expect to be welcomed aboard and in that we were not disappointed.

Usually the crews of these ships are amiable and smile at gawkers but the A was clearly off limits and a bit foreboding. Maybe a touch of paraskevidekatriaphobia with a soupçon of selenophobia? In any event, the folks around A were immune even to the charms of a small white dog. But all was not lost.

There were lots of other boats were in the harbor today for our viewing pleasure.

Matson is our major shipping line and our lifeline between Hawaii and the Mainland.

We watched a Matson container ship off-loading its cargo, a familiar sight because close to 80% of the products in our state come from overseas.

That explains in large part why prices are so high in Hawaii!

The “Atlantis” provides lunch and dinner cruises along the South shore of Oahu.

We saw a sleek and stylish sightseeing boat called “Atlantis” that works a bit like a hydrofoil, rising up on four struts.

We have fond memories of this boat. Twelve years ago, when our son married, the Alpha Japanese Female and I held a dinner on this boat for the members of the wedding party.

This tourist submarine dives off Waikiki – it’s quite interesting!

We even spotted a tourist submarine back from a dive off Waikiki. While this sub actually dives to the ocean floor, it does not have an engine room and consequently must be towed to its dive sites.

We’ve taken this tour in years past and it’s quite interesting as the dives take place on wrecks where there is an abundance of sea life.

Fancy boats aside, Aloha Tower is home to the Gordon Biersch restaurant and bar which is a dog-friendly venue where Max likes to pull up a chair and throw down some burger. The folks there are attentive to doggies and will produce a bowl of water without being asked. They also dispense scratches and fawn over the pup.

Max with his Schwarzenbier waiting patiently for a burger.

Hawaii has few dog-friendly restaurants so places like Gordon Biersch are treasured by the pet set.

GB’s clientele is generally tolerant of canines so there is little of the hairy eyeball (locally known as “stink eye”) that one gets when squiring a dog at other eating and drinking establishments.

Max is always on best behavior at Gordon Biersch and, yes, we feed him tidbits from time to time.

He is especially partial to grilled chicken and the classic bacon cheeseburger. I am especially fond of the Schwartzenbier. And the Pilsner. The Hefeweizen’s not all bad, either. And the Sommerbrau.

A tasty chicken morsel, but he has been told to “wait”. The temptation is strong.

All in all, it was a delightful afternoon spent with Wifey (AJF) and Max at the harbor, quaffing micro brews, eating burgers, soaking up the Hawaii sun and enjoying the trade winds.

Even the oligarchs can’t beat that.

PS: for those still stumbling over the surplus of alphabet from a couple of paragraphs ago, paraskevidekatriaphobia and selenophobia refer to fear of Friday the 13th and fear of a full moon, respectively.