Hawaii is the 50th State and as American as apple pie. Except we don’t really identify much with apple pie. We’re far more likely to identify with haupia pie made from coconuts or taro pie or any of a bunch of other pies that exceed apple in popularity; things like coconut cream, custard and lilikoi pie.

I was reminded today that for some folks newly arrived to the islands this slightly foreign nature of Hawaii can be confusing.

Each year our condo has a summer party for all residents. It’s a very nice affair that we hold around the swimming pool and cabana area with music and games and  a tremendous variety of great food.

As a member of the condo board, one of my jobs is to handle the marketing of the party which includes posting signs in our three elevators reminding residents of the date and time. I try to make these signs interesting and humorous and that can be a challenge because our residents span so many ethnicities.

Let me give you a couple of examples. The first one will be immediately understood by anyone who has lived in the islands for a few years. Here it is: 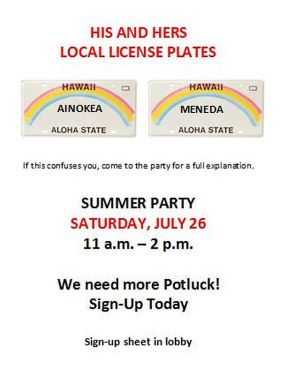 For local folk this is immediately understandable. They get the joke and can relate.

Explanation: The big Swedish furniture retailer IKEA is well known to Hawaii people even though it has no stores here. When said with a Hawaii pidgin accent, the company name sounds like “I Care” which, of course, generated the blowback of AINOKEA which sounds in pidgin like “I No Care.”

Over time, AINOKEA has become the go to word for any situation where one simply does not give a fig. There are AINOKEA bumper stickers. What do you think of local politics? AINOKEA. You get the drift.

So, of course, his and her license plates would feature AINOKEA and the companion plate MENEDA which is the pidgin version of “Me neither.” Sigh, if you have to explain this stuff it loses its humor.

When folks who know Hawaii saw the sign they thought it was funny. For others, it was cryptic. I could see it in their eyes. The look that says, “there really is something not quite right about you, isn’t there?”

Now here’s the other side of the story. This next sign is readily understood by many folks on the mainland and it gets a giggle. However, for many of our residents it is a huge puzzle. They know there is a joke in there somewhere but darn if they can figure it out. Here ya go: 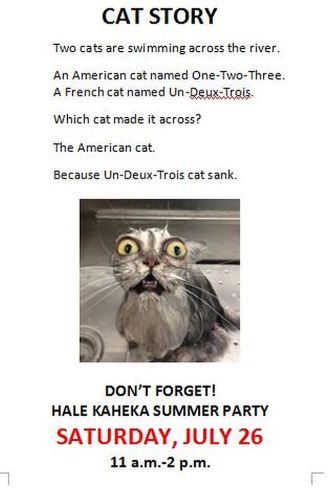 Local folk don’t readily relate to the language word play. Even my auto-correct has problems with this sign.

Explanation: none needed is there? The “cat, sank” is an obvious play on words for the French words for 4 and 5, “quatre” and “cinq.” Well, maybe not so obvious in Hawaii. In fact, judging by the popular reaction to the sign, we need a Rosetta Stone.

I’ll share some more condo party stories soon. In the meantime here’s a link to the write up about last year’s party.