It’s a lushly wooded, extinct volcanic cinder cone that was part of the immense Ko’olau Volcano that formed the southeastern part of our island of Oahu.

Tantalus was named in 1840 by kids from Punahou School while on a field trip.

Today’s destination was close to home. We look at Mount Tantalus from our living room window.

Even now this elite school, President Obama’s alma mater, is where the smart, and/or rich, and/or lucky, kids go.

Not content with naming a Hawaiian cinder cone after a Greek dude, the Punahou kids proceeded to name the adjacent mountains and hills “Olympus”, “Round Top” and “Sugarloaf”.

Smart/rich/lucky, yes, but these privileged spawn were not paragons of cultural sensitivity and the mountain naming trip was a grim day for Hawaiian nomenclature.

The road up the Mount Tantalus. A winding two lanes with many switchbacks.

The mythological Tantalus was a bad boy who committed a cornucopia of crimes depending on which version of his story you read.

Cannibalism, murder, and the flagrant promotion of Internet Explorer were all on his list of misdeeds.

Of all his unforgiveable transgressions, my favorite, because it ties into this blog’s theme, is that he stole a gold dog statue that was intended as a gift for the baby Zeus.

His punishment was to stand in a pool of water beneath a fruit tree with low branches. Whenever he reached for the fruit, the branches went up. Whenever he bent down to get a drink, the water went down. Bummer.

Cruel tantalizing. The cookie is on the wrong side of the glass table.

Thus Tantalus evolved to the English verb “tantalize”, the proverbial word for temptation without satisfaction.

Sort of like passing a microbrewery on the one day it is closed for renovations.

Or seeing Kim Kardashian’s latest photo spread when you don’t have a paddle.

As mounts go, it’s not very tall, rising to only 2,014 feet in America and only 614 meters in the rest of the world. It has long been a popular retreat for Honolulu dwellers seeking cooler temperatures, a rain forest-like atmosphere and great views. 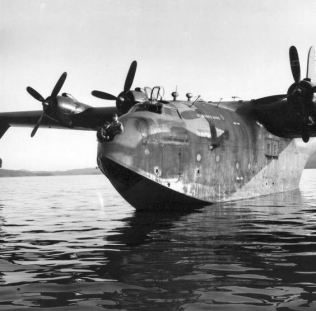 The Kawanishi H8K was an Imperial Japanese Navy flying boat used during World War II for maritime patrol duties. The Allies called it an “Emily”.

During World War II, the US Army manned an artillery control station on Tantalus.

Not many folks know that the southern slope of the cinder cone was bombed by two Japanese Flying Boats during their failed second attack on Oahu (the first one was Pearl Harbor) on March 4, 1942.

If you never heard of this second attack, by all means click this link for a short recap of Operation K, a near text book example of what the Japanese have come to call “Murphy-san’s Law.”

There are numerous hiking trails on Mount Tantalus including a six mile loop trail that meanders through a forest of aromatic eucalyptus, guava, myrtle, shower trees, monkeypod, jacaranda and vast swaths of stag-horn ferns. 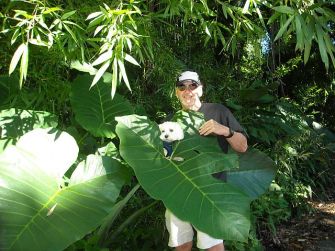 The giant ‘Ape plant is related to and resembles, a taro plant on steroids. Malt added for scale.

The hill is also popular with death-defying skateboarders, indefatigable bicyclists and joggers seeking a personal understanding of the term “myocardial infarction.”

The first home on Tantalus was built in 1880 and due to the challenging terrain, electricity was not available until the 1920’s, some 30 years after the bulk of Honolulu had service.

Although it is only 3 miles from downtown Honolulu, this misty and rugged area has no public water or sewer connection. 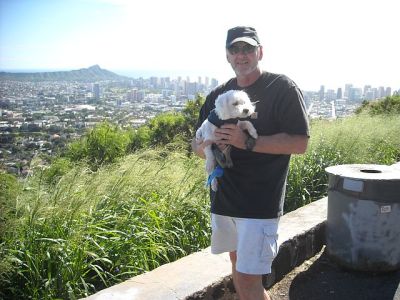 The Malt at a roadside stop overlooking Manoa Valley, home of the University of Hawaii.

Instead, they rely on catchment systems to collect nightly rainfall and septic tanks or cesspools for waste disposal.

The AJF and the Malt prowl along Makiki Stream.

There is a small State Park about halfway up Round Top Drive named Pu’u Ualaka’a.

It’s a wonderful spot to view the city of Honolulu and most all of the south shore of the island.

According to the local tale, Pu’u Ualaka’a means “hill of the rolling sweet potatoes.” 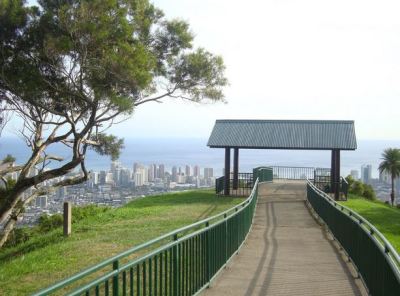 The short walk at Pu’u Ualaka’a ends at this little pavilion overlooking Honolulu.

It was named by Kamehameha I who ordered sweet potatoes to be planted on the slopes. When they were dug up, they rolled down the hill.

Kamehameha I was a literal kind of guy when it came to place names.

He pretty much sucked at farming, too.

Dogs are not permitted at Pu’u Ualaka’a.

However, keeping with the spirit of Tantalus, we went rogue and simply ignored the signs, broke the law and thereby risked a future of standing in duplicitous water under malevolent fruit trees just so the Malt might experience the sights. 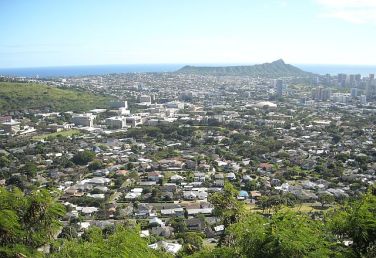 View from Pu’u Ualaka’a lookout. A hazy day due to “Vog” which is produced by the Kilauea volcano.

The road to the top of Mount Tantalus connects to the adjacent hill called Round Top so most folks make the drive into a loop.

There are numerous spots to stop along the road and a night drive to admire the city lights is a popular activity.

Younger folk will stop at the turn-outs for long periods of time to watch the nightly offshore submarine races, an activity which curiously fogs car windows. 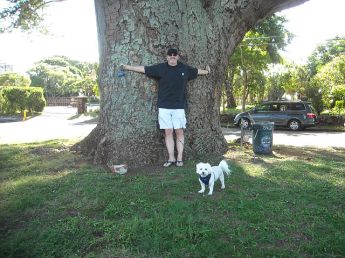 There’s a little park in the Ualaka’a area that has an enormous Earpod Tree. Max lifted a leg, I merely posed.

On the lower slopes of Tantalus is the neighborhood of Papakolea, home to the largest concentration of Native Hawaiians in urban Honolulu.

In Papakolea, eighty-five percent of residents are full or part-Hawaiian.

To complete our loop we drove past a mini-park that has a giant earpod tree and we let the Malt get out and stretch his short legs.

All too soon we were home with Max sitting by the condo window, gazing up at the site of his most recent adventure and dreaming of the smell of rolling sweet potatoes in the morning. 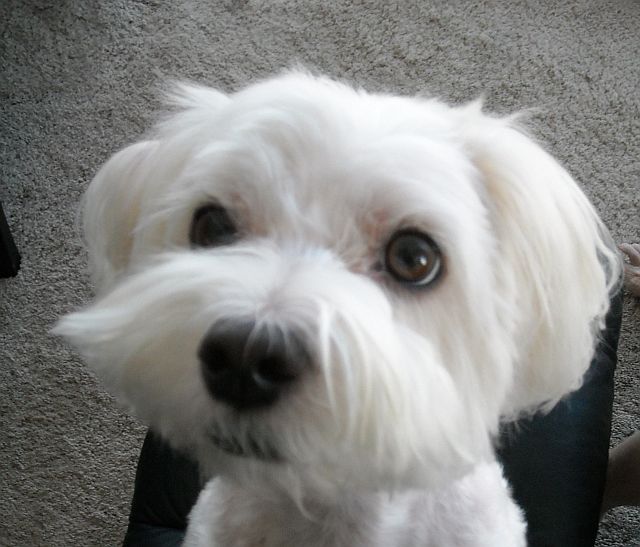 When can we go exploring again?