Today was the 42nd annual Honolulu Marathon. The starter’s gun triggered a fireworks extravaganza at 5 a.m. when about 22,000 folks launched themselves on to the rainy streets of pre-dawn Oahu.

The Kenyan and Ethiopian runners finished about ten minutes later. Here’s some video from our local paper The Honolulu Star Advertiser:

About the Kenyans and Ethiopians…I kid, but not by much. Those guys and gals are fast. I’ve watched them run by and my two lasting impressions were that their legs start immediately below their shoulders and their feet barely touch Planet Earth.

Max, the AJF and I participated in the Honolulu Marathon the same way we do for the famous Ironman competition: we roll over, pull up the covers and go back to sleep. Three heads in the bed. 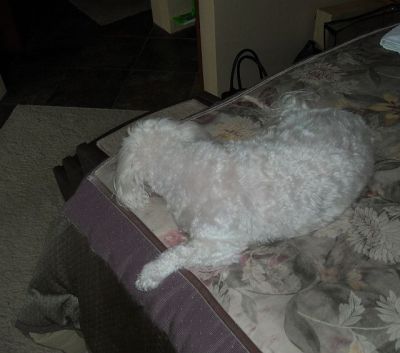 The official designated Malt Spot at the foot of the bed.

The little white dog has a funny relationship with our communal bed. His official spot is at the foot of the mattress directly below the AJF whose limited height means there is enough space for a small dog. Were he on my side he’d have to contend with two huge feet that generally extend over the edge of the bed.

In the course of any given night Max roams about the bed. If I am on my side he deposits himself with a resounding thud in “the pocket,” the concave space formed by my fetal position.

If the AJF and I are both stretched out he will get in between us and lie on his back hoping for a late night belly scratch.

Based on the drama that accompanies the climb, you’d think this was the back way up Kilimanjaro.

Max has a set of stairs by the bed so he can come and go at will. On warmer summer nights he frequently will leave the bed and sleep on a stretch of cooler tile floor.

Even in winter he will get up, descend the stairs and have a sip from his water bowl before returning to snuggle again. The problem is that he makes an unholy amount of noise for a tiny dog and he persists in slamming himself against us when re-occupying “his” territory.

The bed plays other roles in Max’s life. When angry he will retreat to the bed, bury himself under the pillows and start that strange digging behavior we have all seen dogs do. Humped back and with a look of furious intent on his face, he burrows into the bottom sheet as if to dig his way to a place where more compliant dog owners might live. 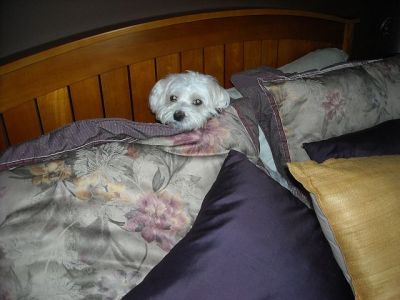 Here he is…the Maltese bed cave diver coming up for air after a major hissy fit and bed digging episode. All because we needed to go to the grocery store without him.

His bed digging is quite different from his carpet digging.

The carpet dig is done with one paw in a desultory fashion while rotating about a pivot point roughly under his fuzzbutt.

The resentful bed digging is a rapid alternating of paws. No fooling, you can really see that he is angry.

Other digging behavior occurs after baths. As soon as he is released from a good towel drying he rockets to my favorite easy chair, jumps up and starts digging into the chair. We think this activity, like bed spelunking, is an expression of canine indignation.

For such a ball of fluff the Malt has a giant personality. Some folks wish they could talk to their dogs but after watching a few of these digging episodes I think there are times when I’d rather not hear what Max might have to say.