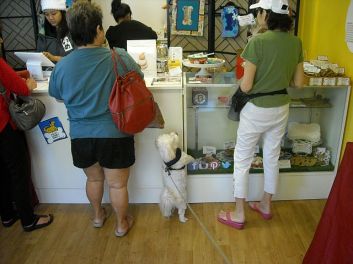 Max is a good shopper who stands in line to wait his turn. That’s the AJF on the right.

Max likes to gift his doggie friends with poi products at Christmas time.

That’s the reason we headed a few miles mauka of our home to visit the Hawaii Doggie Bakery in lovely, misty Manoa Valley.

Max loves this bakery which specializes in dog treats, gifts and paraphernalia with a distinctly Hawaii touch. 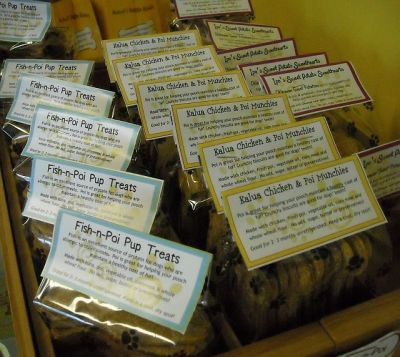 For Christmas, Max is distributing to his boon companions gift boxes which contain a bag of chicken & poi cookies, a poi & honey candy cane and a roll of poop bags for post prandial clean up.

Max is a dog who likes his poi but he is not a poi dog.

See, in Hawaii “poi dog” has a very specific meaning. It refers to mixed breed dogs, especially those of uncertain lineage.

We even use the phrase to describe folks of a mixed Hawaiian-Something Else heritage. Don’t worry, the phrase has a positive connotation suggesting stamina, durability and a salt-of-the-Earth personality. 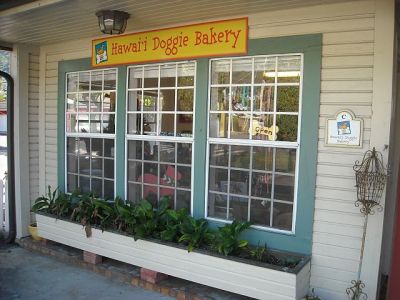 The Hawaii Doggie Bakery doesn’t bake doggies. It does make some mighty fine treats for doggies!

So Max, as a purebred Malt,  is not a poi dog even though his appetite suggests he is a mix of Maltese and voracious Great White Shark.

Poi is the primary Polynesian staple food, made from the underground part of the taro plant.

Ancient Hawaiians, believed that taro expressed the sacred spirit of Hāloa, the original ancestor of the Hawaiian people.

Poi is traditionally made by cooking the heart of the taro root in an imu, an underground oven, for hours and then mashing it until it is a very thick paste.

Water is added to achieve whatever consistency is desired.

Poi is low in fat, high in vitamin A, has bunches of complex carbohydrates and is naturally gluten free. It can be a bit of an acquired taste, particularly if left to ferment for a few days into sour poi. 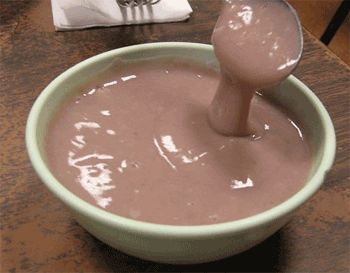 When folks first make its acquaintance they inevitably compare poi to wallpaper paste. We expect that remark and feel disappointed if someone doesn’t make it.

Folks all around the world eat taro but only Hawaiians make poi.

Local folks eat it plain or mix it with a little sugar and sometimes milk.

No matter how it is served, the AJF can’t stand it but I like it and a Hawaiian plate lunch is not complete without some poi.

Poi is also used as an ingredient in many wonderful baked goods.

It adds a soft, satiny mouth-feel and smoothness to breads, rolls and numerous desserts.

Enough about food, let’s get back to today’s subject which is the Hawaiian poi dog. What we today call poi dogs has absolutely no relation to an actual poi dog. OK, that needs a bit of explanation…here goes: 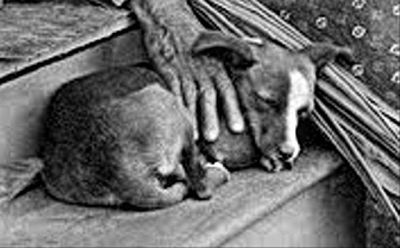 Many folks don’t know that there once was a breed of dog known as the Hawaiian poi dog.

It came to Hawaii with the Polynesians during the first settlement more than 1,000 years ago and was an important part of the Polynesian people’s life. 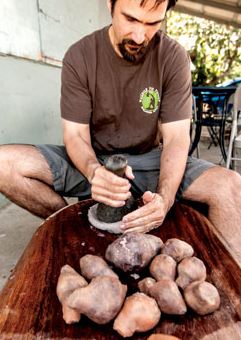 Pounding poi. After baking, this is how the process starts. Photo credit: Honolulu Magazine

Poi dogs were raised by Hawaiians as companion animals and as a food source. The dogs were only fed poi because meat was too valuable to be used as dog food.

This limited diet made the dogs inactive and obese, waddling around with distended bellies not unlike the author of this post.

Over the years the diet changed the shape of the dogs’ skulls which became large and flat due to disuse of the temporalis muscles from lack of chewing.

Women were in charge of the care and maintenance of poi dogs. Guys were busy with waddling and their distended bellies which, as all men will agree, did nothing to diminish their sex appeal.

Some poi dogs were kept as “good luck” animals for children thus it was highly possible that a poi dog might sleep with the kids on Monday and be eaten for dinner on Tuesday. Bummer.

Captain Cook recorded encounters with pot-bellied, short-legged poi dogs that freely associated with hogs in the village. It seems that hogs and dogs were pretty much peer critters to the Hawaiians. 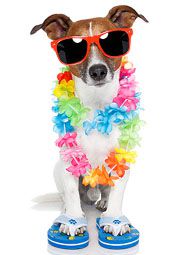 Not a poi dog. This is a tourist dog.

By the 19th century, the Hawaiian Poi Dog had inter-bred with feral dogs brought by European settlers to Hawaii and was no longer a pure breed.

The Honolulu Zoo tried to reconstruct the original but after 12 years of trying it was deemed a failure and the program was discontinued.