The AJF, possibly threatening Max with dogicide at the Pali.

In Hawaiian, pali means any steep slope or cliff but when folks on Oahu talk about the Pali they refer to a very specific spot, a small saddle of land on the crest of the Ko’olau mountain range that separates the eastern, windward coast from the rest of the island.

The Ko’olau mountains are not very tall; the highest peak is only 3,100 feet.

By the way, Ko’olau means “windward” in Hawaiian and that 3,100′ peak is Konahuanui which means “man from Kona with big balls” but I digress.

Interestingly, the mountain range is actually the western rim of a massive volcano that slid into the ocean a million and a half years ago. The landslide generated a tsunami wave over two thousand feet high that rose up and covered ninety-five percent of the island of Lanai. Today, geologists find coral high up on the mountain slopes of Lanai that trace back to this event. 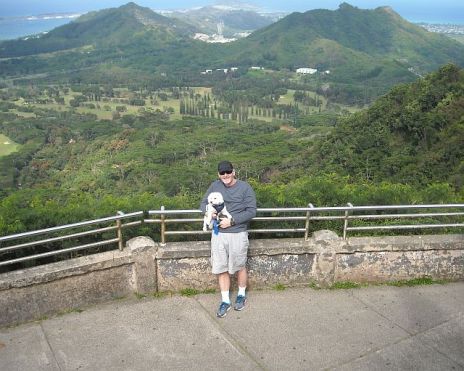 The pup and I enjoying the panoramic view from the Pali Lookout. The haze is from “vog”, a volcanic smog drifting from the Big Island’s Kilauea Crater.

The Pali is most famous as the site of an epic battle that took place in May 1795 while King Kamehameha I was uniting the islands of Hawaii.

The fight is known as the Battle of Nu’uanu, which is the name of a valley on the eastern slope of the Ko’olau range.  Kamehameha and his 10,000 warriors arrived from the Big Island in 960 war canoes and promptly corralled their enemies at the head of the valley. They pushed them ever further uphill until they reached the Pali, at which point Kamehameha drove them over the edge to fall 1,186 feet. 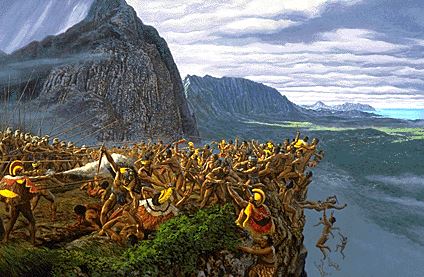 Painting by artist Herb Kane of a really bad day for the Oahu warriors.

The Pali has always posed a formidable obstacle to folks wanting to get from Honolulu to the windward side.

Records indicate that intrepid, ancient Hawaiians did climb across the Pali but it was truly a death-defying endeavor and only the fittest or most foolish made the trek.

Much later a hiking track was eventually driven through the rain forest and across the lava rock and despite the slippery slopes, people crossed often. The travelers’ technique was to strap supplies and small children to their backs  while traversing the trail.

Building the Pali Road. This is where the lookout is located today.

The hiking trail was widened in 1845 and in 1897, construction started on a narrow and treacherous two lane paved road.

The road workers found eight hundred skulls piled at the foot of the Pali – all that was left of the warriors who were defeated by Kamehameha in the Battle of Nu’unau.

As you might imagine, there are beaucoup ghost stories and folk tales about this area of the island. Imprecations abound.

Don’t carry pork over the Pali. Beware the apparition of Madame Pele who shows herself as an old woman with long white hair and a small white dog.

Spooky Morgan’s Corner on the old road below the lookout.

Stay away from the huaka’i, the ghosts of the ancient warriors, the Night Marchers lest you make eye contact and must join their march forever.

By all means do not stop at Morgan’s Corner, site of a gruesome (although probably apocryphal) murder or suicide, depending on the storyteller. 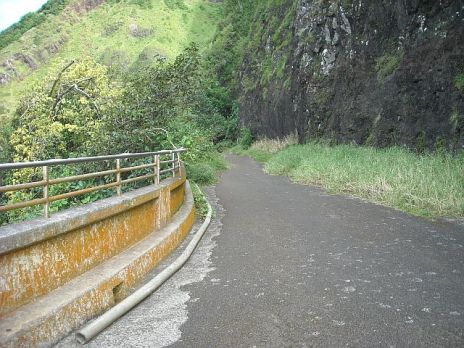 This is one of the few remaining stretches of the original road across the island to the windward side. Back then there was no railing.

In the late 1930’s plans were made to build a tunnel through the mountain in order to make the road less perilous.

When opened in 1959 this was a huge event for the residents of Oahu.

Although delayed by WWII, in 1959 the road was completed and was considered quite the engineering masterpiece of its time.

Today, folks cross the Pali with all the bacon they want using a four-lane highway and two tunnels.

The old road is almost entirely gone but small stretches remain and today the AJF and I packed up the Malt and took the slower two-lane route up the famous cliff.

One of the grand old homes in the Dowsett neighborhood of Nu’uanu.

We started with a visit to the neighborhood called Dowsett which is home to many fine old estates, some of the grand dames of Hawaii architecture circa 1925.

These were the homes of the rich and famous of the day. 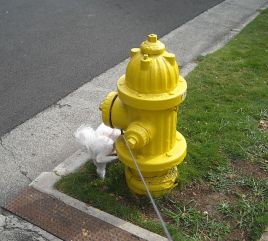 The area was popular because the higher elevation of Nuuanu Valley kept temperatures cooler in the summer.

The summer palaces of the Hawaii monarchs were in this general vicinity. Max likes the level streets with nice sidewalks and groomed medians, all under a canopy of tall tress.

Oh yes, there is also an abundance of fire hydrants in the neighborhood which adds to its allure from a canine perspective.

The uphill road travels through a rain forest environment with lots of little waterfalls and dense undergrowth with flowering vines that climb and totally encapsulate the trees. 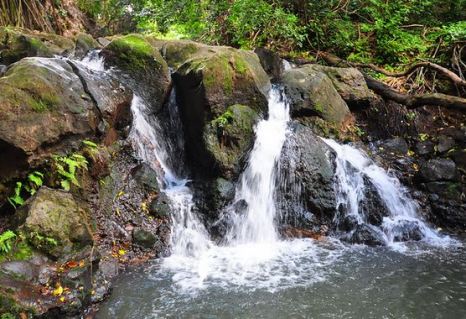 A local swimming hole called Jackass Gingers, about a half mile off the road.

Passing through the tree tunnels we spot the occasional hiker heading for a small but popular swimming hole and waterfall spot known as Jackass Gingers, named for the plant the thrives in the area. 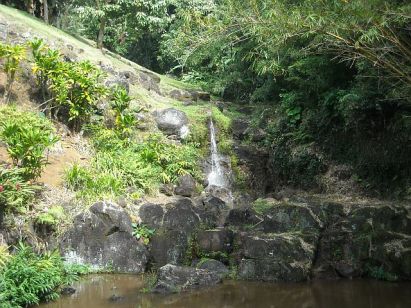 Small waterfalls and steams abound along the old road to the Pali.

The actual Pali Lookout has been thoroughly developed by the State and attracts millions of visitors annually who take in expansive views of the windward coast and Kane’ohe town.

The lookout is known for its occasional fierce winds and it is also a starting point for several hikes ranging from mild and amusing to where-shall-I-send-the-body-if-found.

A couple of historical markers are easy to miss. One tells of the crash of a B-17 Flying Fortress on the Pali just four months after the Pearl Harbor attack and the other describes a world soaring record by a guy named William A. Cocke in his glider “The Nighthawk.” 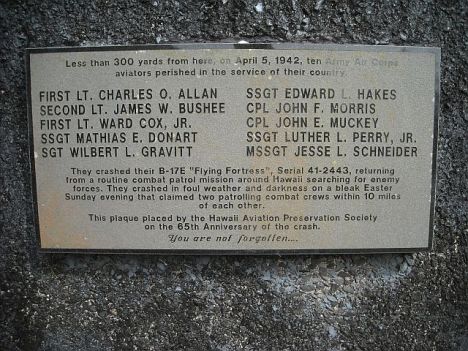 On December 17, 1931, he launched from the Pali and flew for 21 ½ hours through the night, soaring over mountains lit up by the Army’s 64th Coast Artillery Battalion.

The sign commemorating an historic event in the history of soaring.

Max enjoyed his visit to the Pali, not so much for the views but because he was an attraction for many of the tourists who bestowed tons of pets, scratches and unearned praise on his fuzzy butt. 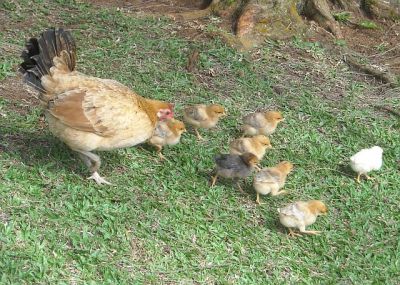 Max wanted to play with these chicks and the Mama hen but was warned off by the rooster who lurked nearby.

He met a family of feral chickens and wanted to investigate but was intimidated by the rooster.

That put paid to his confidence level so we retreated to our car and drove home.