Max Visits The End Of The Road 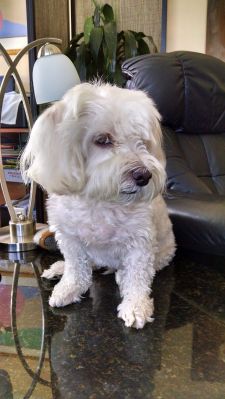 Are you trying to get rid of me?

The Malt was frankly suspicious when informed that today’s jaunt would take him to the end of the road.

For a dog who soaks up luxury and leisure pursuits, that sounded a bit too challenging to Max.

But after a few rounds of hold-the-cookie-on-your-nose, the wee Furbeast was ready for some exploration of his island home.

Today’s end of the road destination was Mokulēʻia.

Mokulēʻia means “isle of abundance.” It’s a small, rural town located on the western side of Oahu.

There are probably 2,500 people living there; it’s about as remote as one gets on Oahu. It’s where the road ends, literally, as one tries to circumnavigate Oahu counter-clockwise.

There was once a railroad around this far western point of Oahu and the dirt road used to go all around this part of the island, too.

I drove it in a beat up 1949 Chevy as recently as the late 1960s (OK, that’s not very recent) but erosion caused the path to slide into the ocean.

One can still ride bikes or hike around the coast but no vehicles are allowed. 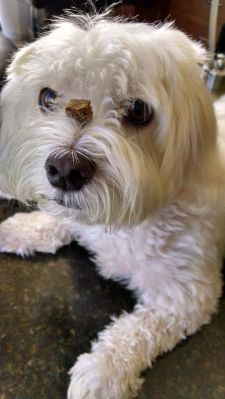 Taunting the Malt with the old cookie on the nose trick.

Due to its remote tropical setting, that rather strange television series “LOST” filmed several scenes on the beaches of Mokulēʻia.

Fans will recall scenes of the beached fuselage from the fictional Oceanic Airlines flight 815.

The prop airplane drew a lot of attention as it sat on the beach for months because the crash appeared so authentic.

The television series Hawaii Five-0 also uses this area in various episodes where a wild coast is required.

The Mokulēʻia beaches are still a bit of an Oahu local secret.

The folks who come out here are self-contained. They don’t seek or want food stands or souvenir stores.

They bring tents and wind shelters, giant coolers and barbecues ranging from little hibachi to full scale Weber gas grills that they carry off the back of their pick up trucks. 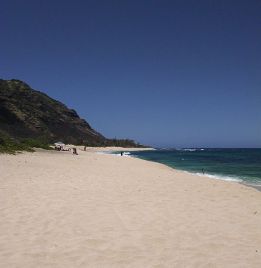 A local “secret.” Well, not really but it’s a great place to avoid crowds.

It’s a mix of local folk and military folk with a smattering of tourists and all intermingle, generally with great success and mellow moods.

Mokulēʻia is also known as home of the Dillingham Airfield, formerly Air Force Base, which is a joint military/civilian airport currently used for glider riders and skydiving. Its military use is as a training location for night vision devices.

The airfield’s history goes back to the 1920s when a communications station called Camp Kawaihapai was established. At that time there was a railroad along the southern and western ends of Oahu and it was used to transport mobile coast artillery to the site.

By 1941, the Army leased additional land and established Mokulēʻia Airstrip with Curtiss P-40 fighters deployed there when the attack on Pearl Harbor took place.

After the Pearl Harbor attack, the runway was paved and extended to 9,000 feet long. By the end of World War II, Mokulēʻia Airfield could handle B-29 Superfortress bombers and was the longest air strip on the island. 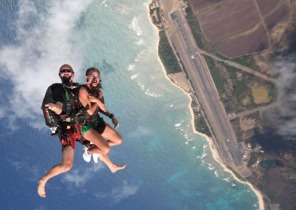 Parachute jumping over Dillingham. Not for me. No, thank you. Photo credit: Honolulu Magazine

In 1948, the airfield was inactivated and renamed Dillingham Air Force Base. Nike missiles were installed in the 1950s, one of four sites located on the island.

The Nike-Hercules guided missile was a nuclear-capable weapon but was obsolete by 1970.

In 1962, the State of Hawaii leased Dillingham for general aviation use. In the 1970s the base was transferred from the Air Force back to the Army. 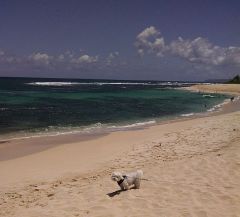 Just a dog and his beach, walking in the sunshine. The dog, not the beach.

Adjacent to the airfield is the Mokulēʻia Forest Reserve.

The Reserve is home to the Mokulēʻia Trail, a 10 mile trail that offers scenic views and is rated as difficult.

The trail is primarily used for hiking, mountain biking and road biking and is accessible year-round.

Dogs are also able to use this trail although certain porky Maltese dogs have been known to faint at the idea of a long outdoor hike.

One mile beyond the airfield is the entrance to Kaʻena Point, the westernmost tip of land on the island of Oahu. Spelling and pronunciation count with this name. 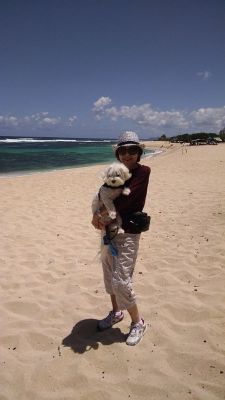 His feet got too hot.

Kaʻena with the ‘okina (the little backward apostrophe) can mean “the heat” or “the hottest part of the flame” and refers to those things that are glowing, raging, enraged.

On the other hand, kaena without the ‘okina means to brag or boast, to be conceited or proud. If you have hiked Kaʻena you will appreciate the little backwards apostrophe – Kaʻena can indeed be hot as the gates of Hades and you will not be doing much boasting.

Though long uninhabited, Kaʻena was once an important community for fishing, feather-collecting and salt-making.

Nowadays, Kaʻena is a State Park and a nature preserve and a very significant cultural location. 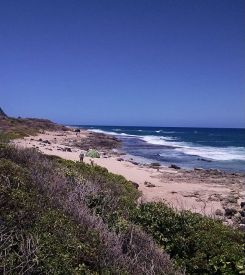 The path to the jumping off spot where souls leave this world to enter a new existence.

It represents to Hawaiians the place where the souls of the dead leap off to join their ancestors in the next realm of their existence.

There are several such leaping off spots on the Hawaiian Islands and each is a special place full of stories and legends and, frankly, creepy as hell as night.

Kaʻena is also a living example of native Hawaiian ecology.

The area is abundant with native coastal plants and a total of 11 plants found at Kaʻena are on the Federal endangered species lists.

The reserve is a haven for the rare Hawaiian monk seal, and honu (Hawaiian green sea turtles) can often be found resting along the coastline.

In the deep waters, just off the point, spinner dolphins play and hunt for food. During winter and spring months, humpback whales are a familiar sight offshore. 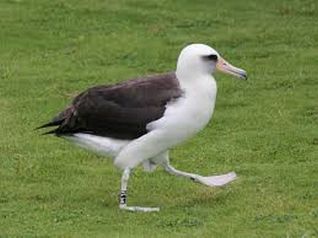 The Layson Albatross. Though found from Japan to Alaska and across the Northern Pacific, 99.7% of all nesting sites are in Hawaii.

Kaʻena is also home to birds such as the Laysan albatross and wedge-tailer shearwater and of course there is an abundance of fish of indescribable color and variety. For those seeking a little turf with their surf, there are plenty of mongooses and feral chickens darting across the roads, too.

After wandering around the road’s end, we watched the gliders for awhile but alas there were no parachute jumpers to be seen. So after some beach exploration the AJF announced she would like to stop at Kualoa Ranch for a bite, so we bundled into the car and headed 50 miles east where we enjoyed a pleasant lunch which, of course, included feeding Max his fair share of grass-fed local burger.

And then came bath time. 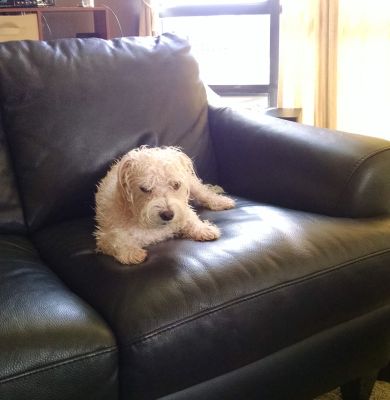 I’m wet, angry, betrayed. But the burger was good.