I told the Alpha Japanese Female (AJF) that Max and I were going to visit Mu Ryang Sa. She responded, “Huh?”

Mu Ryang Sa, the largest Korean temple outside of Korea, the Malt’s destination.

That is pretty much the reaction you will get from many folks on Oahu when you mention the name of the largest Korean Buddhist temple outside of Korea. It’s just not that well known.

Despite its relative obscurity, Mu Ryang Sa (the name means “Broken Ridge Temple”) is a fascinating place. It’s found at the end of a narrow, winding road that penetrates deep into Palolo Valley just a few miles from Waikiki Beach.

Even the derivation of the name is interesting. It is called Broken Ridge Temple in part because the Honolulu City Council denied a request by the temple builders to exempt it from the height restrictions in the building code.

Notice how the roof was cut from a peak to a flat surface which may have ticked off a lot of monks but, of course, being monks they would never show it.

As a result, the contractors had to cut off the peaked portion of the temple roof.

The resultant “broken ridge” is a sore spot for the temple monks but they have turned Buddhist lemons into theological lemonade and point to the construction debacle as a learning lesson proving that all in life is an illusion and that “ignorance should be ignored.” (a shot across the City Planning Department’s bow, methinks.) 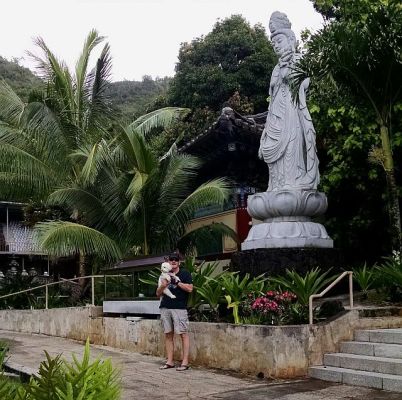 The Malt had a special affection for this statue which I think is the Goddess of Mercy. Max apparently equates mercy with treats.

Mu Ryang Sa is not an ancient worshipping place. It looks old because of its traditional architecture, designs and ornamentations. Whilst Mu Ryang Sa holds replicas of pagodas and statues dating to the 5th century, the temple actually started construction in 1980.

It is more than just a lovely place for the monks to hang out, chant and meditate. The temple is also a cultural community center with educational, cultural and monastic programs.

For three bucks (less for seniors – cough – and students) anyone can visit the temple and explore the grounds and even enter some of the buildings. Dogs, Maltese for example, are prohibited and therefore must be smuggled on to the temple grounds.

Dogs are not permitted. That’s not a dog. That’s Max at a pagoda.

Long term, Mu Ryang Sa hopes to launch a four-year college that is devoted to Buddhist studies in English.

The school wants to focus on Korean Buddhism, language and culture including Korean dance, music, calligraphy and tea ceremony. The marketability of a degree in tea ceremony is left open to debate.

The temple gardens are both lovely and peaceful and, according to a certain Malt, they smell good, too.

There is much to see at Mu Ryang Sa starting with an impressive entryway where giant statues of the “Four Heavenly Kings” guard each of the cardinal compass points and prevent the evil spirits from entering. According to legend, they sit up high and use their feet to squish the bad guys.

A cockroach-eye view of the Heavenly Kings keeping the riff-raff off the property. This photo by David Chatsuthiphan at http://www.unrealhawaii.com

A focal point of the property is the World Peace Pagoda. In the center of the pagoda’s base is a small urn, holding the remains of the Buddha. These came from a temple in Sri Lanka and are revered by believers as genuine relics of the historical Buddha.

The Bell Tower houses an impressive bronze bell that is a copy of the historical Emille Bell in Korea, the oldest Buddhist bell in Korea and the largest ringing bell in the world.

The main temple featuring the manifestations of Buddha, photo by David Chatsuthiphan.

Dominating the temple grounds is the main building – the Hall of Heroes – which holds several manifestations of Buddha in a stylized Chinese setting which reminds visitors of the migration of the religion to Korea from China.

Statuary abounds. Some of the figures are on a grand scale and some are tiny and tucked away in the nooks and crannies of the temple grounds, for example, a crowd of 1080 miniature figurines of disciples.

There are (allegedly) 1080 of these little rascals located behind the Main Hall. They are said to represent faithful disciples.

There’s a lot more to see at Mu Ryang Sa and I’d recommend you click on the gorgeous photo site done by David Chatsuthipan. Like David, I do not pretend to fully understand what I am looking at when I visit there but my eyes gobble up the beauty nonetheless.

Max seemed to enjoy his visit. The selection of sniffing material was extensive and I’m pretty sure he got a small buzz from the incense. The AJF and I agreed to return again sans pooch to explore this hidden piece of Oahu at greater depth.