When I was a kid, my Dad would drag out the famous lines from Lewis Carroll’s poem The Walrus and the Carpenter anytime some matter of importance needed discussion.

“The time has come,” the Walrus said,
“To talk of many things:
Of shoes–and ships–and sealing-wax–
Of cabbages–and kings—”

Well, the time has come to speak of some things here on the silly dog blog, too. Not shoes or cabbages.

I am not one to sneak up on a topic or sugar coat news, so I’ll just blurt out that this is likely the final post in the series about Max’s adventures in Hawaii. 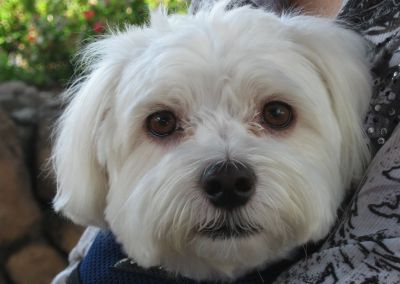 However, before I elaborate, let’s talk about Spike Jones.

Spike was born in 1911. He specialized in writing and performing novelty songs, often parodies of famous musical scores and popular tunes. He would take a tender ballad, a moving classical piece or a treasured song and add gunshots, cowbells, slide whistles and all manner of outlandish sound effects. He would also change lyrics with abandon.

Spike and his orchestra – The Musical Depreciation Revue – became quite famous touring post-World War 2 North America. Later, Spike formed a second orchestra which he named “My Other Orchestra.” Actually, over his short career – the booze and ciggies got him at 53 – Spike had lots of bands including “The City Slickers” and “The Band That Plays for Fun.”

But I digress even further than I intended.

I bring up Spike because he recorded a classic parody of the Hawaiian War Chant. After a tender opening verse of “Aloha ‘Oe”, Spike intones the timeless phrase:

“As the sun pulls away from the shore, and our boat sinks slowly in the west…”

OK, before we go much further you need to hear Spike’s version of the Hawaiian War Chant, a parody guaranteed to offend every resident of the 50th State. Give a listen…

By the way, if Spike is unfamiliar to you, do yourself a favor and Google his stuff. It’s old-timey, corny but ultimately very funny material and, trust me, you will waste many happy hours exploring all that he left behind.

In what may be the greatest sentence in all of Wikipedia is this explanation of the impact that Spike had on modern music:

There is a clear line of influence from the Hoosier Hot Shots, Freddie Fisher and his Schnickelfritzers and the Marx Brothers to Spike Jones — and to Stan Freberg, Gerard Hoffnung, Peter Schickele’s P.D.Q. Bach, The Goons, Mr. Bungle, Frank Zappa, The Bonzo Dog Doo-Dah Band, The Mystic Knights of the Oingo Boingo, The Beatles and “Weird Al” Yankovic.

Is that great, or what? The Bonzo Dog Doo-Dah Band. Who knew?

Let’s get back to the point of this post.

The reason that I say this may be the finale of Max’s Hawaii explorations is that we are moving away from our beloved Hawaii a little later this month. By the time Thanksgiving raises its cholesterol-laden, turkey and stuffing head, we will be residing in…gasp!…California.

“Good heavens, man, are you daft?” they say. Well, maybe, but we prefer to look on our relocation as starting a new phase of our lives. The motivation for the move is simple, unimaginative and very common: as we evolve from elegant seniors into  Old Pharts with a Malt, we find that our family tree has become a pyramid.

Our family tree. It’s all about the base.

We sit at the top with no parents or elder relatives. Our siblings have passed and except for the odd cousin (and that adjective was judiciously chosen) there are no peer relationships.

All we have are the kids and grand kids and, as long as we stay in Hawaii, we will never see them with any frequency. Their interests, aspirations and careers have taken them away from the islands and, for them, Hawaii is now a holiday destination, not a place to make home.

Basically we are moving to be closer to, and more involved with, our kids and their kids’ lives. As many of you will appreciate, this face time stuff gets more important as mortality becomes a more immediate issue. So, the move is all for good, even if it comes with very mixed emotions.

I don’t know what to do with this silly dog blog. There over 150 stories here and most of them are about a gentle little white dog who explores his island home. It doesn’t feel quite right to take a turn and have him now explore California, but simply terminating the blog doesn’t seem right either. What to do…what to do?

If you, Dear Readers, have any thoughts on this subject let me know. The next few weeks will be busy ones but I’ll do my best to reply to comments.

Packing and prepping to move is at best a wee black bear of a task and at worst a ferocious Grizzly bear of a task. So we’ll just grin and bear it. Snorf, snorf.

We were fortunate with the sale of our condo: we listed it and had first showings on a Friday. A ton of people showed up. (No, really, they each weighed a ton. It looked like a plus-size sale at WalMart.) We were in escrow at 9:00 a.m. Monday morning.

The sheer number of details involved in a cross-Pacific move is intimidating. It can be stressful. I have found, for example, that all my possessions are really of inconsequential value and we should look to reduce the clutter. Meanwhile, the AJF’s stuff is sacred ground without which we will surely perish in the wilds of California.

My “junk” – her term – can be tossed into cardboard containers with vegetable pictures emblazoned on the side while her “possessions” – her word again – must be gently packed with organic, gluten-free floss plucked by virgin Nepalese monks from free-range hummingbirds’ armpits. Perhaps I overstate the case.

Despite the seemingly overwhelming list of “to-do’s” we know that soon we will be saying goodbye. We’ll be boarding United Airlines while the Poocharoni, after a visit to Miss Nanako at the Beauty Salon for Doggies, will be loaded on Aloha Air Cargo to meet us six hours later on the really big island of North America.

We are also making our final visits to our favorite spots and restaurants, spending time with dear friends of long standing and looking at our home land with a different set of eyes that want to take in, capture and preserve sights that we won’t see again, at least for awhile. I think the AJF’s eyes may have been a bit misty of late.

Paul Theroux said, “Hawaii is not a state of mind, but a state of grace.” Thus it shall always be for us. But it is time to once again swirl up our little Nutri-Bullet of a mixed nationality family and say “さよなら” (sayonara). See ya later. Farewell and godspeed. And in the immortal words of Spike Jones, “Wicki wacki woo.”

Thanks for being with us on this silly dog blog and joining the Mighty Furball on his adventures in the 50th State. I count all you fellow dog-lovers as good friends and promise to be a faithful reader of your blogs in days to come.