The Dog from Rancho Cucaracha 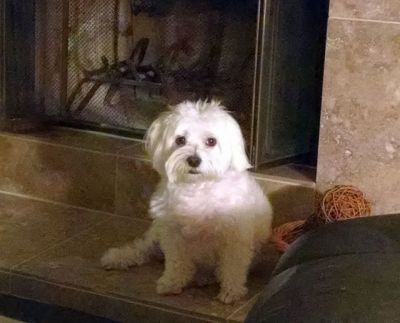 That’s just a name the AJF (Alpha Japanese Female) made up. Max’s new home is really a town called Rancho Cucamonga which, come to think of it, is equally silly sounding.

“Rancho,” as it is called colloquially, is in Southern California, about 60 miles east of the Los Angeles Airport. No ocean views until the next big earthquake. It sits at the base of Mount San Antonio which everybody calls Mount Baldy. At 10,064 feet, Baldy is the highest peak of the San Gabriel Mountains, and the highest point in Los Angeles County, California.

Of late, some folks have taken to calling me Mount Baldy but without the Mount part, but I digress.

If you are of a certain age (and I know which ones of you are) you’ll remember Jack Benny who, from January 1945, had a running gag on his radio program in which Mel Blanc, the voice of Bugs Bunny, pretended to be a station agent who announced repeatedly, “Train now leaving on track five for Anaheim, Azusa, and Cucamonga,” drawing out the name of Cuc…amonga longer and longer each time. That schtick is largely the reason there is a Jack Benny Street in Rancho Cucamonga and a bronze statute of the old time comedian is at the local playhouse.

The 1948 cartoon classic Daffy Duck Slept Here also had the wise- cracking, slobberin’  poultry saying the famous Jack Benny lines.  Part of the joke, for the Los Angeles audience, was that no such train route existed, although all three cities do exist.

If you were a 60s freak (and I know which ones of you are) you’ll be pleased to hear that Frank Zappa  did some of his best stuff here in Rancho Cucamonga. But there is no Zappa Street as far as I know.

And who, besides all of you, could forget Jan and Dean’s immortal 1964 paean to senior ladies and their muscle cars, “The Anaheim, Azusa and Cucamonga Sewing Circle, Book Review and Timing Association.” Well, here ya go…and don’t miss the final tender lyrics: “Go granny, go granny, go granny go!”

Anyway, that’s enough Cucamonga lore for now. Rancho Cucamonga is indeed a funny sounding name for a town but Max calls it “home.” Let me catch you up a bit on the Malt… 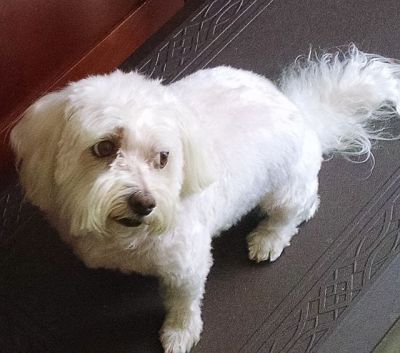 He likes his new home. Except the hardwood floors provide little traction for his mighty paws.

Our move from Hawaii in late November last year went rather smoothly, a result of superb planning and execution on my part sheer dumb luck. We were able to spend the holidays with family which was a delight for all. Initially, we rented a condo so we would have time to explore our new environs and decide where to settle. We expected it would take a while.

However,  we quickly found a little house that met our requirements, made an offer and were new home owners by December 29th.

Max had no problems with the transition from his beloved islands. He flew from Honolulu on Aloha Air Cargo and was delivered to us at midnight on our arrival date, his little cage having been carried across the airline warehouse on the 6-foot prongs of a huge forklift.  Later, he received so many surreptitious treats from everyone on Thanksgiving Day, Christmas and New Years that we considered renting that forklift to move His Furriness around. 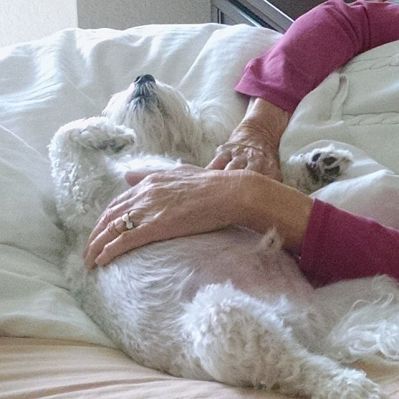 The struggle is real but he tries to cope.

Max settled into his new abode immediately. It’s a modest place but it’s almost 3x the size of our Hawaii condo and…drum roll…it has a fenced backyard and lawn which, to our knowledge, is virgin territory with respect to canine poop. It’s the kind of place a Malt can roll on his back and return covered with green stains and smelling only of grass.

Very close by our home is Central Park which is a lovely spot where we brazenly flaunt the local dog ordinances and let Max run free for as long as he likes which is usually about three minutes. 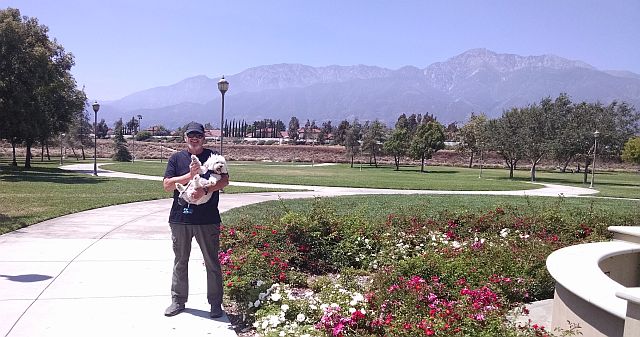 Max’s other backyard, Central Park with Mount Tom, er, Baldy in the background.

Of course, yours truly got himself a big old BBQ right off the bat and we built a patio and cover so we can enjoy the maximum time outside which is a carry over from our Hawaii days. We have a hot tub, too, that enables us to fully immerse (snorf, snorf) ourselves in the sybaritic California lifestyle, sans Speedo, and thereby assault our new neighbors’ eyeballs.

The Furface found a new veterinarian who was successful in prescribing a new medicine that has made a huge improvement in mitigating the itchies/scratchies which have afflicted the pup since birth. Happy, happy, dog, dog. 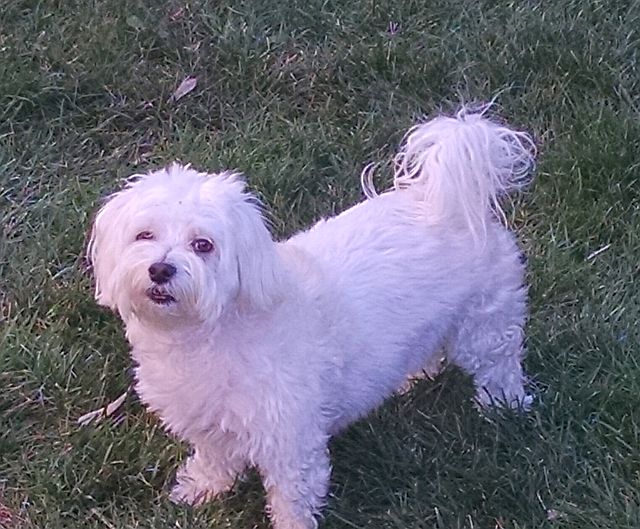 Okay, a lot of this is fur…but some is dog fat. He’s slimmed some since this photo.

Max’s big challenge at the moment is to lose weight. Throughout the moves and new experiences he has been eating a little too well. He has always been a master at extracting treats from everyone and has added a “poor transplanted me” look to enhance his productivity when begging.

The AJF has taken to using a tape measure to check the distance between Fuzzbutt’s belly and the floor and she records the dimension weekly.

Max’s adventures so far have taken him up the California coast to a town that proclaims itself the most dog-friendly place in the State, to visit family in Sacramento, up to Lake Tahoe and along the eastern slope of the Sierra plus many shorter day trips. As in the islands, Max is always on the move, discovering new places to sniff and pee. I hope to report on these and other adventures in future posts.

In closing this post, I need to apologize to all of you for not staying better in touch over these past months. No excuses, and I hope to catch up on what’s happening with each of you. In the meantime, if you are of a mind to follow a gentle little white dog’s exploration of a new home, you know that you are most welcome on the journey.