Max and the Search for an Inu Shirt

It was the day before Father’s Day. In anticipation of the celebration, Max and I were productively engaged in the traditional activities of quaffing malt beverages, chomping jerky treats and telling snorf, snorf jokes when the Alpha Japanese Female interrupted and wistfully mentioned that she wished she had a new inu shirt.

As a loving spouse, I immediately recognized that my beer and Max’s treats would be in jeopardy were we to ignore the AJF’s deceptively casual request.

Furball and I leaped into action. Well, that may be an exaggeration. Neither of us is much into leaping but we did lower the footrest on the LazyBoy and reach for the laptop.

Let’s start with the basics: “inu” is the Japanese word for dog. The word can be written using kanji (a Chinese character) or in hiragana which is one of the phonetic, cursive forms of the written language.

Kanji character for “inu” (dog) on left; the hiragana version is on the right. Max says dogs don’t care which one you use. This concludes today’s Japanese language class.

An inu shirt, as mandated suggested by the AJF,  is a tee shirt with a very clever image that incorporates the Japanese hiragana characters for inu with a stylized drawing of a pupper. Makes sense, no?

This design is a great favorite of the AJF; it lets her get all ethnic while walking Max around the neighborhood. Since Max actually understands commands in Japanese as well as English, he is happy with the arrangement.

Let your English Sheepdog wear his Union Jack, let your Poodle wear haute couture, let your Shih Tzu wear dim sum, let your Australian Shepard wear the carcasses of drop bears and other deadly creatures found Down Under. The AJF is turning up, she’s turning down, she’s turning Japanese, I really think so.

The cute tees are made in Hawaii by a small business named idkwhat2wear. This company has a knack for capturing the sentiments, language and attitude of local, as opposed to tourist, Hawaii. Visit their website and see for yourself; consider it an insider secret from me to you. But, I digress.

Back to the inu shirt. These are hard to come by. In the past we’d simply mosey up Manoa Valley to one of Max’s favorite stores: Hawaii Doggie Bakery. Not so easy to do when one lives in Rancho Cucamonga, eh?

Max wasn’t worried at all because he knows the folks at HDB are delightful (and tolerant of marauding Maltese) and already have a thriving business shipping their goodies from Hawaii to less fortunate global locations, basically everywhere else on Earth..

Our fates are dependent on these boss ladies producing an inu shirt, the one with the red arrow. The cat ears may be unforgivable. Image shamelessly poached from Hawaii Doggie Bakery.

We started at the website but, alas, there was no sign of an inu shirt, so we emailed and were advised they were currently out of stock. But the HDB ladies (it’s a women-owned business) remembered our furry little Malt and promised to alert us when the inu shirts were again available. 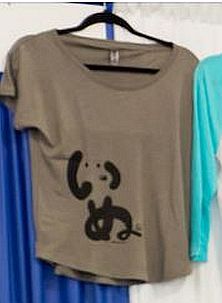 Close up of the inu shirt. (The pixel shortage is all my fault.) Image pirated without mercy from HDB site.

Not incidentally, Max reminds me that large bags of poi cookies are also available for order and we could bundle and save shipping costs. Just sayin’, Dad.

So, now the pressure is on. If we can produce the new inu shirt for the AJF we are golden and The Malt and I can continue our lives as carefree rapscallions. Should we fail, our beer and jerky may well be at jeopardy.

I will update faithfully. I am going to tell the Hawaii Doggie Bakery folks about this post  encourage them to produce the goods. Maybe they will comment on this story. Maybe they will simply remove Max and me from the mailing list.

One or both of the regular readers of this silly dog blog may recall a December 2014 post about poi dogs that extolled the sheer wonderfulness of Hawaii Doggie Bakery’s dog cookies made of chicken and poi.

Here’s a link to that story. Full disclosure, I have no connection with either of the businesses named in this story except as a customer but if you’re looking for fun stuff, unusual gifts and tasty dog treats, you may want to check them out.