Road trip! The plan was to re-visit some our favorite places in the Southwest. With side trips and sightseeing, we figured it would take a week and some 2,000 miles to cover the route from Rancho Cucamonga to the San Juan mountains of Colorado and back, including stops at Zion National Park, Durango, Telluride, Grand Junction and elsewhere.

Actual miles driven were just over 2,200. The Malt has callouses on his furry little dog butt. So did the AJF but it would be indelicate of me to mention that.

The road trip got off to an inauspicious start. A few days before we left, Max developed a strange affliction on his paws. They became red, swollen and obviously painful; he started to limp.

A visit to the Vet produced inconclusive results. There were no obvious signs of trauma or disease. No fungus among us and his claws were in good shape. The Vet attributed the paw problem to Max’s never-ending series of allergic reactions to nearly everything including oxygen, blue skies and sunlight.

Never one to miss a billing opportunity, she prescribed some paw ointment, some antibiotics (just in case), and apparently just for the hell of it, a new ear wash. Then came strict instructions to procure doggie booties and make Max wear them indoors and out for a week to try and isolate his feet from whatever allergens were causing the problem.

A despondent dog. He’s not shaking his booties.

As we drove away $200 lighter, I swore I heard the Vet call her husband and merrily tell him to get a sitter, they were going out for steaks that night.

The doggie booties plan did not amuse the Malt. The medicines he could tolerate; however, the booties were anathema, an insult to Maltese pride, beyond the pale. His spirit was crushed to the point that only several extra cookies could elevate him from a deep depression.

From the start, we were doubtful about the booties but bought them anyway, Max’s contribution to making Jeff Bezos the richest man on Earth, at least for a little while.

He (Max, not Jeff) wore the booties for about three days after which we all agreed that this particular experiment needed to end. Finally, we were ready for departure!

From the Rancho, we first drove to Southern Utah to visit one of our favorite spots: Zion National Park.  The mostly boring drive is a 6 hour jaunt across the Mojave Desert, through Las Vegas and along the Virgin River canyon.

Recent rains caused the Virgin River to be muddy. We didn’t want a brown Malt so no dog swims were permitted.

As some may remember from earlier posts, we used to live nearby and Max’s roots are in Utah. We acquired him when he was 8 weeks old from a very nice Mormon family, after spotting his picture on a community bulletin board at a supermarket in St. George.

They had named him “Dash” which may have been appropriate then, but not now. At 10+ years, Max doesn’t dash about like he used to.

I’ve heard that getting older can be tough, although I have no personal experience. 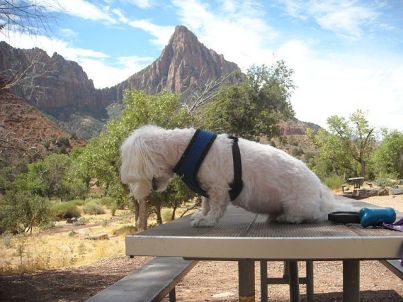 With this perspective, he looks like the Godzilla version of a Maltese. The dog that ate Zion Park.

Whiles he moves a bit more leisurely, Max has gotten smarter with age and has learned to scam the Alpha Japanese Female (AJF) into spending significant sums to make his life easier.

For example, he now has his own ride which looks suspiciously like a baby stroller but, according to Amazon Prime, is actually a bonafide dog carrier suitable for such a manly Maltese.

This is how he rolls. Don’t judge.

As a puppy, he refused to walk over bridges because there were gaps in the footpath and he could see the river below. When we dragged him on to a bridge, he hunkered down and did a Groucho Marx-like squat walk to the other side, his belly never more than 2 inches off the surface. These days he either rides in his carriage or simply waits for his DogMom to carry him across the span.

The AJF and Max demonstrating the Malt-approved method of crossing bridges.

Of course there were picnics and hikes on the Pah’Rus trail which runs along the valley floor. Some of the hikes actually involved having paws on the ground! 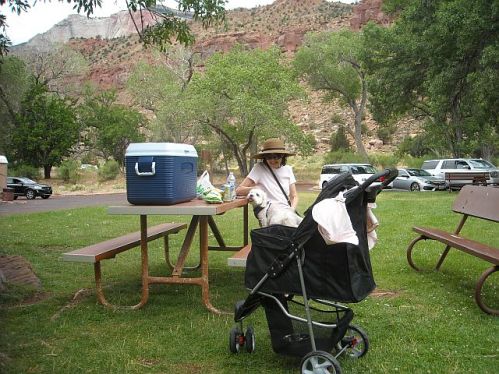 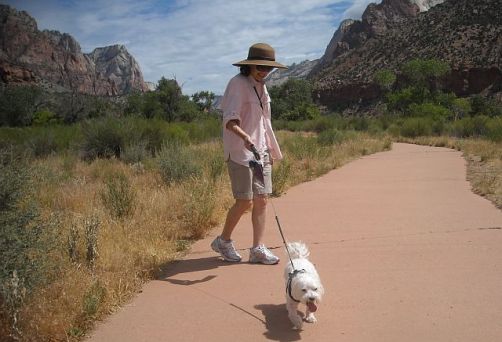 Note the enormous tongue. The one on the dog. It was a bit toasty.

And yes, in the interest of full disclosure, I am also to blame for spoiling the gentle little white dog.

Guilty for aiding and abetting the Malt.

Most of the folks we encountered smiled to see Max riding on the trail but some seemed aghast that we would treat a dog better than they treated their own children. When we spotted that reaction, we leaned over to the little kids and whispered that their parents must not love them very much. Just spreading the sunshine.

“Slow down. My legs are shorter.”