Our short stay in Durango was fun but we were looking forward to visiting the high country. We made an early start thus validating all those stereotypes you hear about old people on holiday. But we actually used the turn signals on our car.

Starting at just over 6,700 feet elevation, our first stop was at the historic mining and brothel town of Silverton at a more rarefied 9,318 ft (2,836 m) . Mining and, uh,  brotheling were inextricably linked in the Old West and both were enormously profitable in Silverton in the 1800s.

Descending into Silverton from Durango along HIghway 550.

Today, Silverton is another high mountain tourist town chock-a-block with restaurants, bars, off-road vehicle rentals and gift shops. But there is a lot of history still to be found there in the many restored buildings, at the City’s museum and in the nearby hills.

In these parts, a Jeep is considered de rigueur.

From Silverton, Highway 550 rises abruptly and magnificently,  topping out after 8% grades at 11,018 ft (3,358 m) at Red Mountain Pass before descending into the self-proclaimed “Switzerland of America,” Ouray Colorado, population 1,100 full-time residents and a half-bazillion summer visitors.

A typical section of Highway 550 as one approaches Ouray.

The ride on Highway 550 is always fun. It is nicknamed the “Million Dollar Highway” and is listed among America’s most dangerous roads although to me that seems a great overstatement.

About that name… Ouray. No, it has nothing at all to do with the service calls of the various branches of America’s military forces. But since we are on that topic, more or less, let’s review those service calls.

Now, let me hear you shout them out, maggot. I CAN’T HEAR YOU!!! 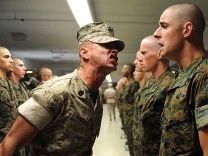 Show me your war face.

That was fun. Anyway, Ouray is actually named after a famous Ute Indian chief and his name means “arrow”. He was quite the remarkable man and you can delve a bit into his story here.

Ouray was our first stop on our tour of the San Juan Skyway, a 236 mile route through some of the most beautiful scenery imaginable. This is what we came to Colorado to enjoy!

Glorious in all 4 seasons.

Aside from its self-promotion as a domestic Switzerland (i.e., without the grumpy banksters snuffling in their raclette), Ouray is acknowledged as the winter ice-climbing capital of the U.S. and home of the world’s first ice climbing park.

It once claimed the second largest gold mine in Colorado and still attracts many to amateur prospecting in the steep terrain around its five hot springs.

Mining is no longer a big part of Ouray’s economy which is now nearly 100% dependent on tourism. Summer activities in Ouray center on mountain biking, hiking, exploring the nearby waterfalls and off-roading in four-wheel drive vehicles into the San Juan Mountains.

Ouray Main Street. Note brewery on right. I like this town

We stopped in Ouray for lunch but spent little time there because the weather turned foul shortly after our arrival. We dined on an outdoor patio to accommodate His Royal Furriness and ended up huddled under the market umbrella trying to hold down our Cobb salads and the dog stroller as the wind, and dog, began to howl.

It was getting late, so we moved nine miles up the road to Ridgway, a town best known as the site for the old John Wayne movie “True Grit”. Actually, a number of western movies have been made there; the scenery is perfect for that kind of flick. In other celebrity news: Ralph Lauren owns a 17,000 acre ranch – “The Double RL” – in a jaw-dropping beautiful area just outside the tiny downtown. 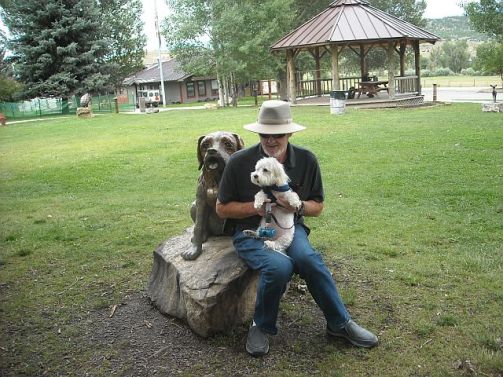 Playing in the park at Ridgway. There were many art pieces and statues but Max particularly liked this one.

The following day our goal was Telluride, population 2,325. Telluride is a former silver mining camp founded in 1878. Strangely, the town was named for a type of mineral that was never mined there. Telluride sits in a box canyon surrounded by steep forested mountains and cliffs with Bridal Veil Falls at the head of the canyon. 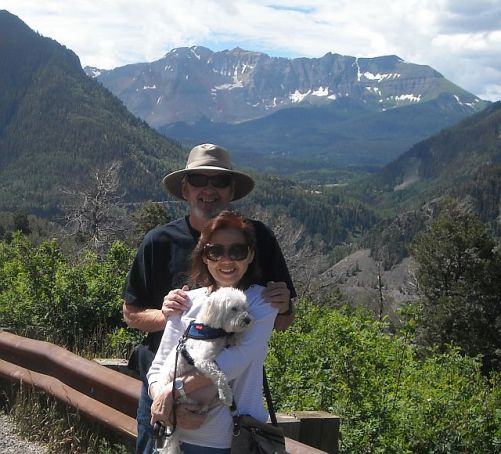 The 3 Musketeers en route to Telluride.

Telluride is the archetype of Colorado’s schizophrenic high mountain tourist towns. On the one hand it is synonymous in pop culture with the lifestyles of the rich and famous and, indeed,  there is wealth that Midas would envy. Real estate ads by the dozens tout homes tagged at $4 – $20 million dollars and more. Movie stars fly into Telluride airport on their private jets and dinner can cost you an arm, leg or gonad.

On the other hand, the town has plenty of hard-core mountain adventurers and superb athletes who care only about the climb, the schuss, the ice canyons and little about cash. These folk happily co-exist with everyday working class, tourists galore and a fair number of characters who ought to be named Smelly McFuzzynuts for reasons left to your imagination. But I digress.

Stir all these together and you get Telluride where the people-watching is exquisite fun and your wallet takes a beating – we paid $17 for two hot dogs with chips and a Coke.

Not kidding about the $17 tube steaks. Here’s photographic proof of our elegant repast in Telluride. Bought from a street cart, no less!

One thing for certain: Telluride is staggeringly beautiful in any season and paradise for those who like outdoor mountain activities.

Anecdote: Years back, the AJF darn near divorced me after I took her in my truck up one of the more difficult off-road trails. It was her first experience with negotiating gravel mining tracks and switchbacks only 15 inches or so wider than the truck’s wheelbase with sheer drop offs on one side. Once on the path there is no turning back so she had to endure a couple hours of what she deemed to be sequential near-death experiences.

The “road” that almost got me booted. Not my photo, but the same road and my truck was a larger vehicle.

Arriving safely back at town, she told me if I ever tried anything like that again (with her in the truck) she would walk out and never be seen again. She meant it.

Anyway, after spending time rolling Max around Telluride, we went sightseeing across Lizard Head Pass and around Trout Lake and ultimately ended up back at our lodge.

Our time was running out and we knew we had to leave Colorado and head home. Because of other commitments, our return journey was all about covering distance and nothing about sightseeing.

On one day we drove to Cedar City Utah and the next, all the way home. We chalked up the ferocious return trip and resultant monkey butt as the price we had to pay to enjoy the rest of the trip. It was worth it. 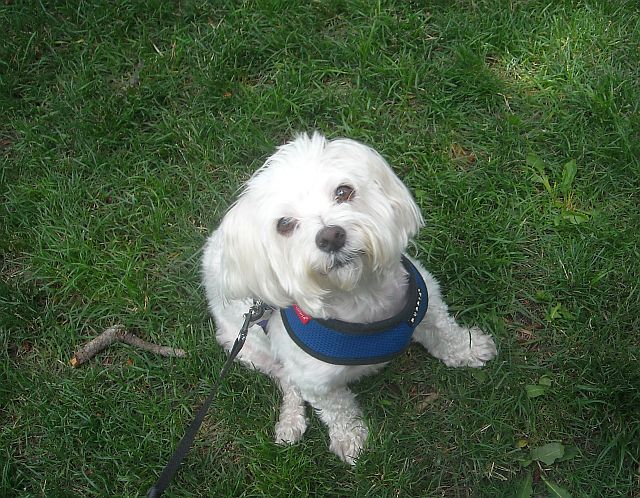 That was fun! Let’s go on another road trip!

And that, fellow travelers, is the story of Max’s visit to the Southwest.