In the last, not so exciting post,  readers were challenged with picking Max from a group of 10 Maltese. Well, here he is:

The post was titled “Fungible” which, of course, is an adjective that refers to something that is mutually interchangeable. Dollar bills are fungible. Most all commodities are fungible; for example, one quart of oil is the same as another.

Things that are similar but which are not identical are not fungible even though the differences are hard to discern.

For example, Meghan Markle’s wedding veil and a receipt from CVS pharmacy.  Not fungible. Snorf. 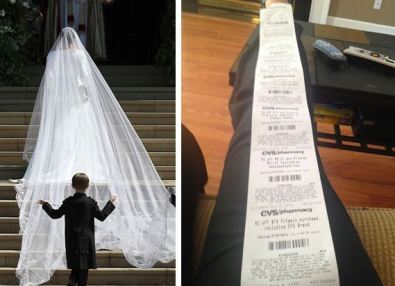 Meghan didn’t get the BOGO, free sample or 20% coupon either.

Sharp-eyed Latin scholars, few of whom visit this silly dog blog, will remark that “fungible” comes the Latin verb “fungi” and not the Latin noun “fungi.”

The verb form comes from fungibilis, meaning “to perform” whereas the noun refers to a fungus among us. Neither of these derivations seems to apply to the Malt although I guess there’s some resemblance between the Furball and a button mushroom, from an activity-level perspective if not visually.

Speaking of mushrooms, back when we toured the western National Parks in our RV, I had the Alpha Japanese Female convinced that Portobello was a city in Idaho.  For the geographically-challenged, and our friends from other places, the actual city name is Pocatello.

As they say, explaining a joke is like dissecting a frog. Ultimately you gain understanding but it really, really screws up the frog. But again, I digress.

Back to the issue of canine fungibility. It’s obvious that our dogs are unique even if they bear close resemblance to others of their breed. They could be cloned doggies and we could still differentiate them by personality and behavior.

That’s certainly true of Max.  Mixed in a herd of other Maltese, I’d instantly distinguish him by his loud snore and disconcerting habit of generating and dispersing  disproportionately large methane clouds while the AJF and I are Netflixin’ and chillin’.  At least, I think he’s the guilty party .

Did anyone correctly identify His Poochiness?

Well, the closest was Lois from Florida who waffled on her selection but included the correct photo among a passel of other choices.

Still, she’s the only one who specifically mentioned #3 so let’s have her go the front of the class and take a bow while we sing her praises! Meanwhile, those who made multiple incorrect guesses are invited to stroll the silly dog blog walk of shame.

“Did anyone guess right? Because I don’t really care.”

Max was unimpressed with this whole experiment. As summer approaches, his attention is increasingly drawn to the outdoors. The flowers are blooming and the garden is chock-a-block with Asian and other veggies like daikon, kabu, komatsuna, nira, tomatoes, peppers, and herbs.

Working on our plants is fun but my laborers get tired and quit on me. But they are certainly each unique and not at all fungible so I think I’ll keep them.

May have to hire some immigrants if I hope to get anything done in the gardens.