The Kern Valley was originally inhabited by Native Americans as early as 100 A.D.

Although some of them may have had contact with the early Spanish missionaries in the late 1700s, the first white guy who entered the Kern was Capt. Joe Walker who showed up uninvited in 1834 looking for the northern most crossing of the Sierra mountains that was passable in winter. 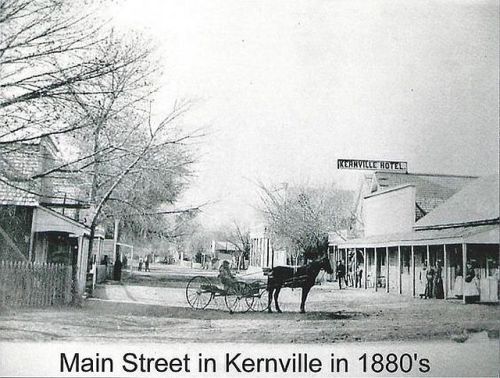 In 1853, gold was discovered and the place was swarmed with instant prospectors looking for a big score. Five years later, a Cherokee dude named Lovely Rogers was chasing his ass (hey! everybody had donkeys then) and he paused to pick up a rock to throw at the animal. Then he noticed the gold flecks in the rock – it was a 42 ounce gold nugget! That got everybody’s attention and with a name like “Lovely” the prospector was no doubt abused more than a rented mule.

Back then, Kernville was called “Whisky Flats” which tells you a lot about the town’s character. It was a gathering of miners, outlaws, secessionists, ladies of dubious integrity and others with quick tempers, fast guns and their own code of swift justice.

Once the setting for many western movies, this site is now at the bottom of Lake Isabella.

As the gold fever burned out, ranching became the main industry but the town retained its reputation as a place of hard fists and hard drinking into the change of the century.

So it was natural that Hollywood would discover this place and make it a location where, since 1919, literally hundreds of motion pictures, TV shows, commercials and music videos were filmed. There were some big hits like the 1939 horse epic “Stagecoach” starring John Wayne and “The Treasure of the Sierra Madre”.

Traveling with Max and the AJF: excitement that rises to a fever pitch.

To be sure, old time movie hombres like Gene Autry and Hoot Gibson and Tom Mix strutted their spurs and Stetsons around town regularly. Humphrey Bogart and Lauren Bacall used Kernville as their secret canoodling hideaway. But, really, a whole lot of the stuff shot in Kernville was pure, Grade-B western schlock.

During the early 1900s, hydroelectric stations were constructed on the wild Kern River to meet demand for electricity from the rapidly growing cities of California. In the 1940s, the government claimed the original town and land to build a dam which would eventually create the largest artificial lake in Southern California.

Today, Kernville is all about adventure tourism with emphasis on river rafting, mountain climbing, hiking, boating and fishing. Nearby are a choice of rafting options from mild to wild, meaning Class I all the way to Class V rapids, which is the technical term for “terrifying.” 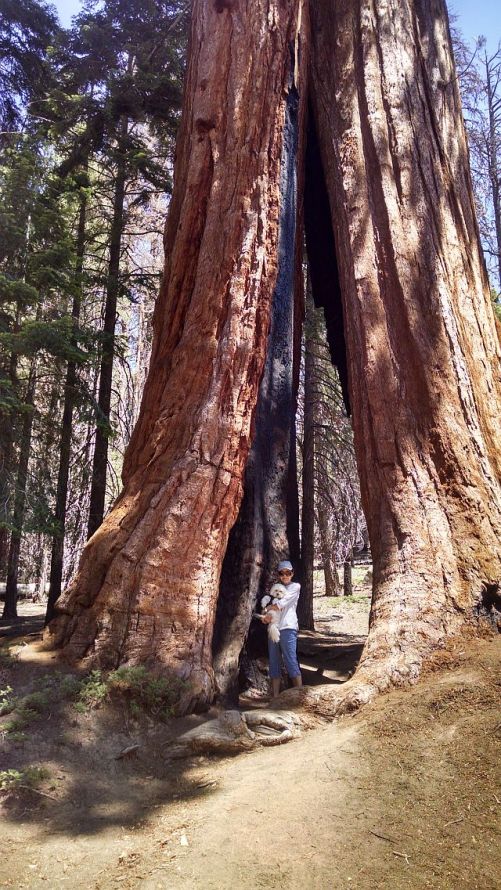 There is a diversity of scenery in the area. Along with the various forks of the Kern River, there are waterfalls, stretches of desert, mountains and the nearby Sequoia National Park, home to the biggest trees on the planet. The famous “Trail of 100 Giants” invites one to hike through the forest along paths beside these 1,500 year-old organic monsters which are truly unbelievable specimens, although (just between us) only about 20 of the trees are sooper-dooper big.

Kernville offers many dining opportunities. On our first night we tried a nice, local Italian restaurant that occupies a log cabin and bears the unimaginative name “That’s Italian Restaurant.” Max gave it “two paws up” because the servers and other diners fawned over him. The parmigiana wasn’t bad either.

Max at “That’s Italian.” He received way more attention than he deserved. He also got some of my Chicken Parm.

The second dinner was at the Kern River Brewing Company (a brewery – you’re surprised?) which produces a mighty fine Imperial Stout at a whopping 10.5% ABV with notes of chocolate, clove and tobacco and…oops, sorry, I digress. The brewery was founded by Olympic kayakers and is the place to après-kayak in Kernville.

The Kern River Brewing Company. The deck on the left is where Max met LB.

This was a fun place because the deck was furnished with communal tables and everyone brought their kids and dogs along. The beer and talk flowed back and forth, the kids yelled, the dogs snuffled as everybody scarfed the robust and tasty pub grub.

Max met a 16 year-old, blind and deaf doggo of significant size and indeterminate lineage named “LB” which stood for “Left Behind.” LB’s owner explained he found a puppy abandoned in the area of the Grand Canyon and took LB home from which he never left.

When LB and his owners arrived they had to squeeze in with us on the benches and LB just brute forced his way in too since he couldn’t see where he was going. He intruded on Max’s space but LB was so mellow that Max, maybe for the first time, actually befriended a much, much larger canine. They actually nuzzled. Very high on the cute meter.

As it passes the city park, the Kern River is quite mild.

We took long mountain drives and spent a fair amount of time in the city park along the Kern River watching the rafters float by on inner tubes usually with a brew in their hands. This was clearly Class I rapids but. then again, the beer looked to be low class, too. Snorf. 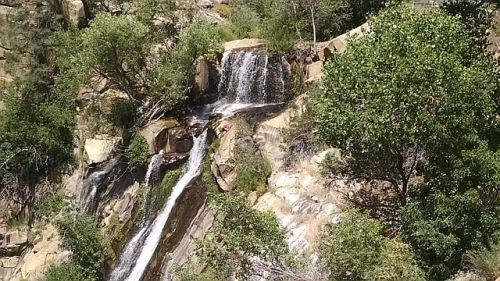 A pretty little waterfall just outside of town.

We ate ice cream, chatted with other visitors, explored the very quaint and interesting museum and strolled about the small town with our Pup Stroller which was helpful because the roads and sidewalks were far too hot for tender Maltese feet.

All too soon our time came to leave but we agreed that this town of some 1,500 residents and a bazillion tourists is worth a repeat visit. The ride home took us out to the Mojave Desert which may be the most unattractive scenery in California. I mean, it fell out of the ugly tree and hit every branch on the way down.

Also, desolate. The town of Inyokern has an official welcome sign outside city limits. Most towns use these signs to declare elevation and population and brag about a famous local attraction. The official town motto on the Inyokern sign used to be “The Sunshine Capital of America” but has since been changed to : “Inyokern – 100 miles from everywhere.”  ‘Nuff said. 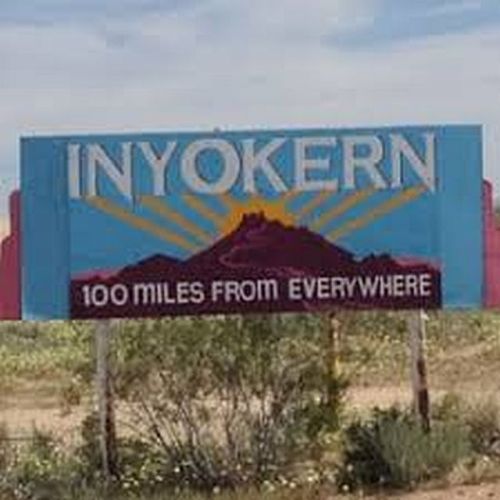 There are only 4 entries in the Top Ten List of Things to Do in Inyokern.

Four hours later we were back at the Rancho examining strange vegetables from our garden. A good time was had by all.