When we told Max we were taking another road trip he was less than enthused because he knew that the first couple of days would be a test of his endurance as we crossed through some of the harshest places in the country.

“Let me get this straight…so we’re supposed to leave here and go to places where the climate can kill me, right? What’s wrong with you?”

No way to avoid it, road tripping across the vast swaths of the American West usually means driving through some of the most boring scenery imaginable to get to some of the most visually stunning places.

The Mojave Desert is almost the same land area as Pennsylvania.

About one hour east from Max’s house is the western perimeter of the Mojave Desert. “Mojave” is a Native American word that means “died of thirst under the blazing sun while surrounded by flesh-eating tarantulas.”

Actually, I made that up. “Mojave” is really a shortened form of “Hamakhaave,” the Mojave Indian word meaning “beside the water.” Heh.

Driving across the Mojave Desert for hours, singing “Bring Me Another Tequila, Sheila” and listening to the sounds of the Malt snoring. Your basic Western road trip.

The Mojave Desert is primarily within southeastern California and southern Nevada but there are bits extending into Arizona and Utah. The desert is enormous, covering 47,877 sq mi (124,000 km2) which is larger than 20 of the states in the US. It also boasts the lowest, hottest and driest places in North America.

These triple container trucks are very common as they cross the Mojave in a caravan. Gets tricky when the wind blows hard.

Interstate 15 is the principal route across the Mojave. Because it connects Las Vegas and Los Angeles, it is always congested with lots of heavy truck traffic jockeying with passenger vehicles full of folk intent on getting to Sin City to hear Celine Dion sing about the Titanic.

Though hostile and notoriously dangerous, this arid region is very popular with visitors and not just those going to Vegas but also those interested in the legendary Death Valley and Joshua Tree National Parks or the many ghost towns, early man sites and off-road adventure opportunities.

People come from around the world to see the Joshua Trees found only in the Mojave. Yeah, I don’t know why either.

There is a strong military presence in the Mojave including the largest Marine Corps base in the world, along with Edwards Air Force Base and the Naval Air Weapons Station China Lake which is known for its experimental aviation and weapons projects.

The presence of these bases might account for the many reports of supposed alien activity in the desert night skies.

You can go to You Tube and look it up. I won’t, but you can.

A tradition when crossing the Mojave (aside from sweating blue bullets hoping your vehicle will not overheat, blow a tire or run out of gas) is to comment on the roadside attractions like the Calico ghost town, the Peggy Sue Diner, the meth labs in Barstow, the rare earth mineral mines in Mountain Pass or the ever-popular attractions of Baker and ZzyZx.

The world’s tallest thermometer. It showed 103 degrees when Max was there, not even close to the 134 degree record in Death Valley.

Baker California, about two hours east of Max’s abode, is a one-street town that proclaims itself the Gateway to Death Valley. This one-street respite from the freeway is home to the world’s tallest thermometer, a 134 foot tall electric sign that was erected in 1991 to commemorate the record 134 °F (57 °C) recorded in nearby Death Valley on July 10, 1913.

Whoo-hooo, could it ever get more exciting? Yes, it can, read on. 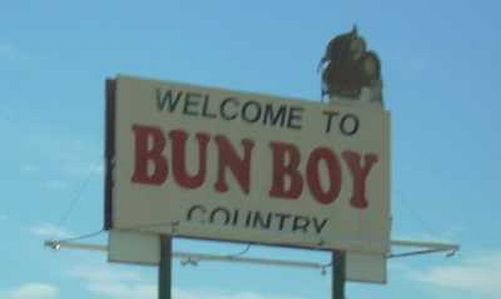 The jokes just write themselves.

Next to the thermometer was a café and motel called The Bun Boy, both now closed, which were quite the tourist attractions in their own right. Given the name, you can imagine the type of selfies taken in front of the café’s sign but after two hours crossing the wasteland, even Bun Boy jokes can sound pretty funny, I guess.

The last name in an alphabetically sorted list of US streets and roads.

Another eminent spot along I-15 is Zzyzx, California. In 1944, a radio evangelist and all round con man made up the name “Zzyzx” and bestowed it on the area claiming it to be the last word in the English language.

He used a dubious mining claim to squat on the land and then set up a health spa at a local mineral springs where he also sold his “special” mineral water to thirsty travelers. It wasn’t until the mid-1970’s that the Federal government called him on his scam and reclaimed the area which is now a Desert Study Center for California State University.

This is how the Malt rolls when on a road trip.

Years ago, a Hawaii entertainer who was well known for always protesting his poverty, described himself (in pidgin) as having “plenny pretty much of nottin.” At first glance that’s a good description of the Mojave. But there’s more there than meets the desiccated eyeball and the Mojave’s bleak exterior actually disguises a myriad of interesting venues and weird roadside attractions if one has the time and constitution to explore this challenging part of America.

For the record, Max usually sleeps through the trans-Mojave crossing, waking only to join the AJF in a biological break in Baker.

No worries, he was never left in a hot car. For this photo he had the air-con on and was listening to country/western drinking songs.