Last year we did our leaf peeping in Japan. The colors of the trees were amazing. No offense to the traditional sites in the Catskills, the Great Smoky Mountains, the Berkshires or Colorado but I daresay the Japan Alps may be the best leaf peeping venue in the world. Unfortunately, Max was required to stay in dog jail while we gallivanted around the Land of the Rising Sun.

This year, our fall foliage sightseeing goals were far less lofty, consisting only of a short trip to the Mammoth Lakes area of the Eastern Sierra Nevada mountains in California. 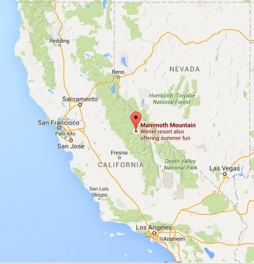 On the upside, a certain small, gentle white dog was able to accompany us.

The town of Mammoth Lakes is Cali’s largest ski destination.

It is your quintessential California ski village. Not twee like Aspen or Vail but not hardcore either.

The town’s resident population is about 8,400 but Mammoth gets 2.8 million visitors annually, split almost 50/50 between winter and summer. Early autumn is a wonderful time to visit the area because travel is easy, it is uncrowded and discounts are available on lodging, etc.

Even though Mammoth is closer to San Francisco, Sacramento and other Northern California cities, it gets most of its visitors from Los Angeles, a five-hour drive away, because there are few trans-Sierra roads and most mountain passes close in winter. 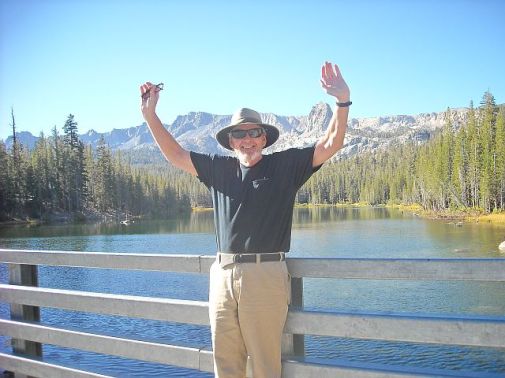 Rather than book a hotel or motel room in town, we decided to reserve a cabin in the woods about 5 miles further up the mountain at the 9,000 foot level (2,743 vertical socialist units.)

In late afternoon we arrived at our rustic accommodation which was part of a 100 year-old fishing camp on lovely Lake Mary. Each cabin in the camp was named after some aspect of the mountain environment: Maple, Aspen, Timber, etc. 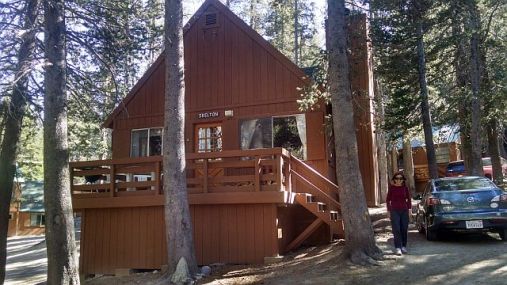 Our cabin was named “Skelton” after a nearby lake that is known for its large trout and apparently not in homage to the old time entertainer Red Skelton who was the bees knees back in the 40’s and 50’s.

Unfortunately, the Alpha Japanese Female’s (AJF) reading comprehension was also on vacation. She read the cabin’s name as “Skeleton” and adamantly refused to check-in because she felt that the name was unlucky. When I explained the error, she stuck with her resistance claiming that the area looked like it had many bears which could be dangerous especially to tasty small dog. 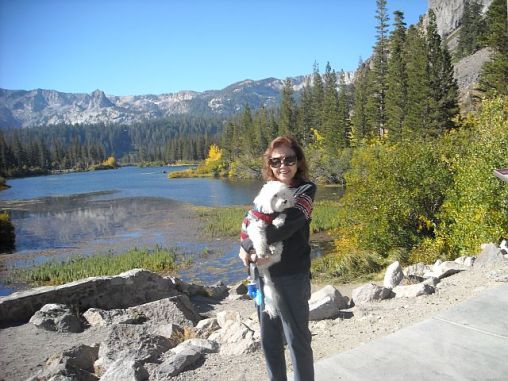 The intrepid mountaineers at Twin Lakes.

I told her that your common or garden variety of California black bear was not an aggressive fellow and, in any case, the odds of even seeing a bear nearby were a 1,000 to 1. Just about then a guy came by literally bellowing, “Hey, did you guys see? There’s a mother bear and two cubs coming down the street!”  Cue baleful look. I kid you not. The bears were not aggressive so at least I got that part right. 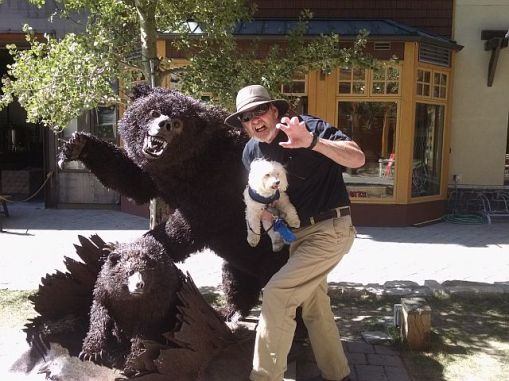 You want scary? ‘Cause I got scary right here.

Anyway, the AJF finally agreed to move into our cabin which was equal parts charm and deferred maintenance. We decided to assemble a modest charcuterie board for dinner on the deck and watch the sun set over Lake Mary. After a couple glasses of a very nice Saint-Émilion, the AJF mellowed and we retreated to the cabin and built a fire. 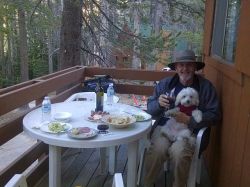 He likes a glass of wine.

As you will have guessed, there was no TV, no radio, no internet and not even cell service in the fishing camp.

Our evening was spent with good books, the aforementioned wine and making fun of the pupster who was fearful of the fire. Each time there was a loud sound from the fire, Max would dart off around the cabin seeking a way to escape the fire monster.

See, we had forgotten that Max had never experienced the snap, crackle and (of course) pops of an open wood-burning fireplace; heretofore, his experience was solely with silent gas logs behind glass windows or, shamefully, the video fireplace on the internet during the holidays. 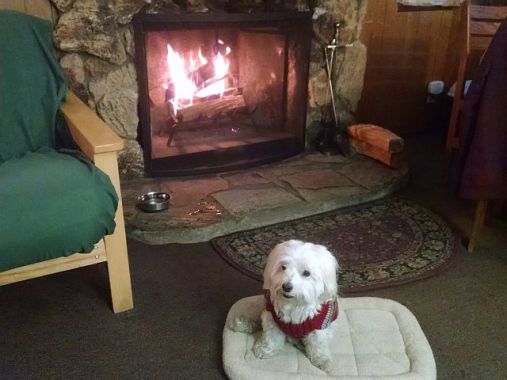 The dog at his leisure, in a sweater, by the fire.

At about 11PM I asked if the AJF wanted to take the pup out for his final constitutional, a query that brought me the most withering stare imaginable. So I leashed the dog, grabbed a flashlight and the final dregs of wine and went for a stroll along the lake in the very, very dark night. No bears. 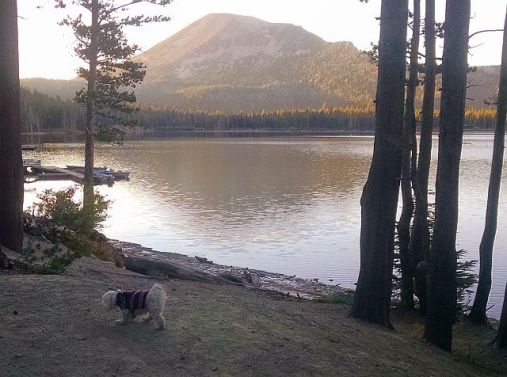 Early the next morning we enjoyed our coffee on the deck and began a day of sightseeing covering well over 100 miles of back roads and trails in search of fall foliage. Turns out we were about two weeks too early. Only the cottonwoods and a few aspen had changed color. The sugar maples were not yet red and the other deciduous trees were lagging behind, too. 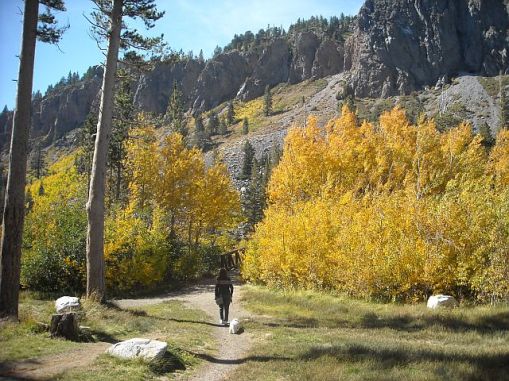 The AJF and Max wandering among the aspens by the creek.

We stopped for a burger at lunchtime. Just as the AJF stuffed the big fat sandwich into her mouth, Max leapt into her lap, causing her to squish the burger bun and propel a sizable dollop of ketchup on to Max’s head.

People nearby asked, “What did you do to your dog? Is he hurt? He’s bleeding. What happened?” He was sitting in the AJF’s lap but everyone accused me of dog molestation. I get no respect. 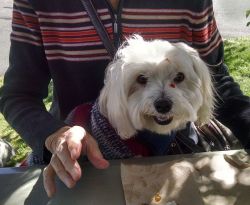 He was actually nonplussed by getting hit with ketchup.

And take it from me, ketchup stains are hard to remove from a Maltese’s noggin.

After lunch came more sightseeing. We spent a lot of time hopping into and out of the car as we visited scenic spots.

The mountain dust was pervasive and our little Fuzzbutt was soon no longer white.

His fur had acquired a grey patina and his paws were the dirtiest ever plus he smelled like 20 miles of dirt road.

We knew we had to stop at the cabin and give Max a scrub to deal with the dirt and residual ketchup stains before going to dinner. I was tired of being accused of dog crimes. 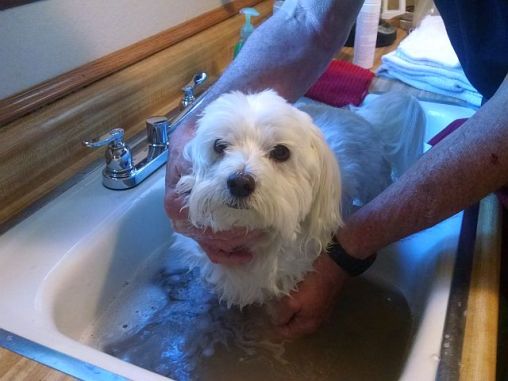 Finally it was beer time. We opted for a visit to the Mammoth Brewing Company’s communal patio where we imbibed brimming pints of Double Nut Brown and scarfed naan tacos filled with Korean kalbi meat. Hey, this is California, don’t judge/don’t mock.

We explored the town of Mammoth Lakes after dinner and did some shopping for souvenirs for the grand-spawn. As the last vestiges of daylight disappeared we headed back to Skelton Cabin and a second quiet evening. 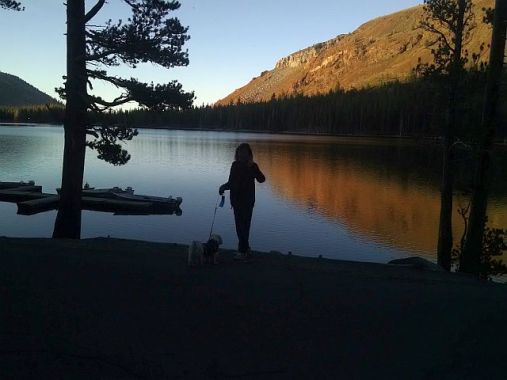 AJF and doggo silhouettes outside our cabin at sunset.

On departure morning we visited the Base Camp Cafe for breakfast. Mammoth is a very dog friendly place and there is an abundance of eating establishments with outdoor seating. Of course Max was in his stroller (although he now prefers the term “poussette”) and received far more than his fair share of pets and tasty tidbits from other patrons.

Then came the long drive home and another, even more thorough, bath for the Malt. 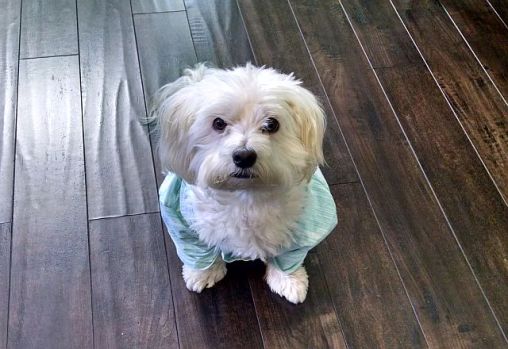