Max raised his doggie eyebrow and asked if I was aware that the word “morro” in the ancient language of the Northern Chumash Native Americans meant “place of dogs.”

“Of course,” I replied, “everyone knows that.” I went back to watching Jeopardy. 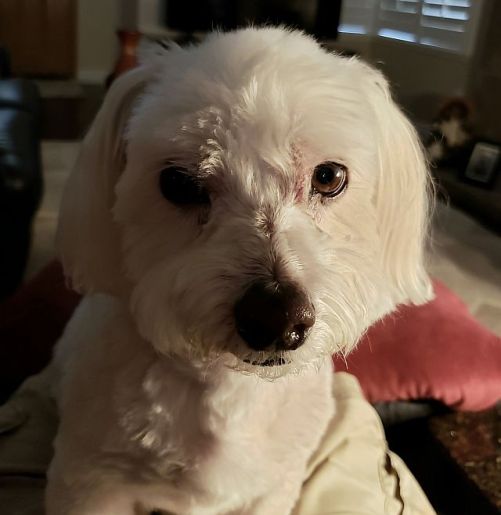 “Move it, Dad, that car isn’t gonna drive itself.”

He persisted, “Don’t you think we should take a road trip and investigate this place of dogs?”

His notion made sense: the forecast for the Rancho Cucaracha area was crushing heat followed by a spell of debilitating heat so a quick road trip to the cool and cloudy coast sounded pretty good.

How hot was it? See visual aid supplied below.

Morro Bay is a popular tourist town on California’s central coast. It is well known for its immediately recognizable, eponymous rock (576 feet/176 meters) that sits in the ocean fronting the town.

Despite Max’s assertion that the rock and town were named in honor of dogs, the Chamber of Commerce says the name comes from the word “morro” which shows up in Spanish, Italian and Portuguese meaning a rounded, prominent hill or land formation. 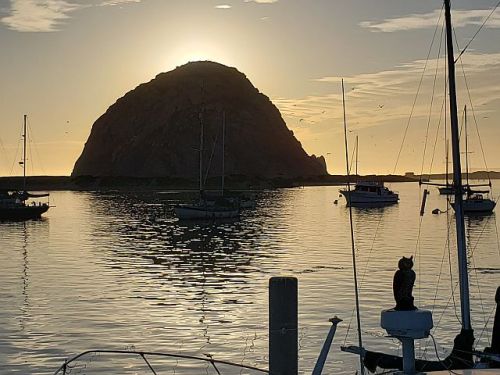 Morro Rock at sunset from our dinner table.

People have been living at Morro Rock and around the bay since about 6500 BCE. The original inhabitants apparently used the big rock as their local version of Stonehedge for solstice ceremonies and whatnot. To this day some tribal folk claim the rock as a sacred place but might jump at the chance to open a casino there.

The Spanish, those historically indefatigable converters of anything that moved, knew about Morro Rock as far back as 1542. What’s surprising is that the first Filipinos to visit America arrived at Morro Bay in 1587, debarking from the Spanish galleon.

The first land expedition to Morro Bay was by Franciscan priests and throughout most of the 1700s and early 1800s the surrounding area was part of Mexican land grants and used for cattle ranching, dairy ranching and farming. 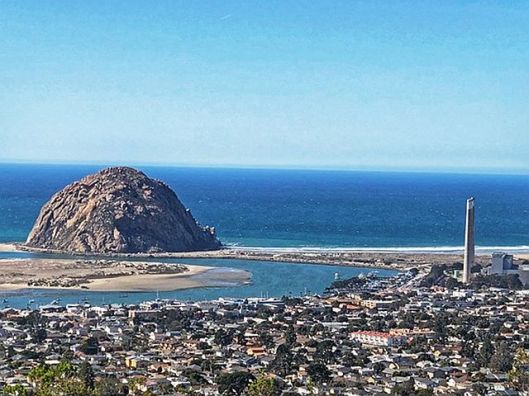 View of the town. The tall tower (one of three) is a defunct power plant. Photo by Glen Starkey, New Times.

The town of Morro Bay was formally established in 1870 as a port for export of dairy products, wool, barley and potatoes.

In World War II, a permanent causeway was constructed to Morro Rock and a Navy base was established to train sailors to operate landing craft. Many of those trained on Morro Rock later served during the Normandy invasion.

The causeway was added during World War II. Chamber of Commerce photo.

Ranching and farming is still a big part of the Morro Bay economy but tourism has eclipsed these activities in terms of revenue. Retired persons make up such a large share of Morro Bay’s 10,000 population that they are considered a distinct source of revenue when the City draws up its budgets.

The official men’s wardrobe of Morro Bay. “Don’t give me grief. I got stuff to carry.”

The center of Morro Bay is its harbor, a natural embayment enhanced by the Army Corps of Engineers. It is a small craft harbor stocked with small commercial fishing boats and pleasure craft from around the world. Because of its shallow draft, currents and hidden obstructions, the entrance to the harbor is hazardous and ranks as one of the most dangerous harbor entrances in California. 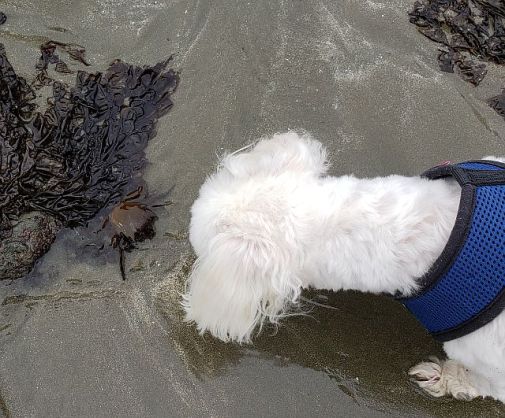 The commercial fleet exploits the nearby waters which offer halibut, sole, rockfish and albacore along with abalone and oysters. In recent years, much of the adjacent land has been devoted to viniculture and there are an abundance of nearby wineries.

So, basically, Morro Bay is a “good eating town” with lots of surf, turf and grape options. As with most California coast towns, however, many of the restaurants are overly fond of deep frying everything.

The Alpha Japanese Female, who eats like an anorexic avian, snarked that Max and I were really packing away the local comestibles. We reminded her that our bellies were still perfectly flat, provided that one allows that the “L” is silent. :snorf: 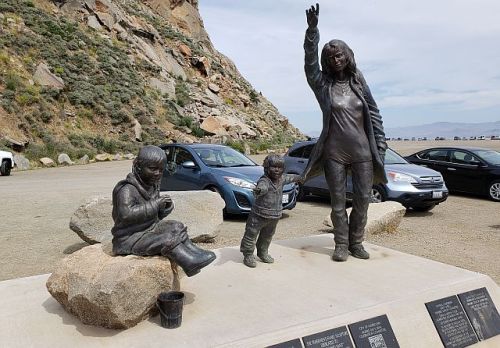 A poignant reminder of the dangers of the sea. The statue is of children saying farewell to their fishing parents who never returned.

We decided to skip the local motels and, instead, booked accommodations in Cayucos, the world’s most dog friendly town, a few miles north of Morro Bay. This was the third year we’ve stayed at the Cayucos Motel. Max’s blog posts about his first two Cayucos trips can be found here and here.

At his advanced age – the crusty old Malt turns 12 in two weeks – Max doesn’t much like playing with other dogs but he is a romantic fool for Maggie and it’s worth a four-hour drive just to see the two of them play together like love-struck puppies.

Unfortunately for Max, his beloved was a bit under the weather and didn’t feel up to boisterous play time. They did a little bit of chase me-chase you, a lot of sniffing and rubbing against each other and then spent extended periods huddling and nuzzling side-by-side on the lawn.

Maggie has a funny little bark that sounds like Cardi B saying “okurrrrr.”

Dogs can run on the Cayucos beaches without leashes and Max made the most of his time zooming on the sand, sniffing tide pools, intimidating the local crustaceans and generally doing his Dog Gone Wild impression.

His days included at least two beach walks that probably covered 2 miles each which isn’t much unless your doggie legs are only 5 inches long in which case that’s a lot of steps!

Maybe it was the ocean air but the AJF commented that Max hasn’t run that fast or long since the last time we took him to Cayucos. Later, the exhausted furnugget slept well as did the other canine guests at the motel. We were again amazed that in a motel full of dog guests, there was never a single bark at night.

Breakfast was included at the motel. Lunches and dinners were taken in Morro Bay. Of course, Max joined us in his stroller which we’ve taken to calling his poussette because that sounds classier.

It seemed that every shop and restaurant along the central coast was dog-friendly which Max feels is the only civilized attitude to hold.

Seafood with a sea view and a construction crane. Max liked the halibut.

Finally it was time to leave. A last visit with Maggie, tender licks, a short run on the sand, a paw wash and back on the road. We stopped by Ojai on the way home for lunch and then battled rush hour traffic for a couple of hours. It was a fun trip. 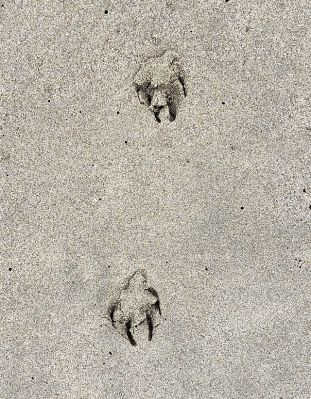 Though saddened at leaving Maggie, Max really enjoyed his trip and summed it up. “It really was a place of dogs.”