Max and the Roadside Attractions

No road trip is complete without stops at the many strange and wonderful attractions along America’s highways.

You know what I’m talking about. Attractions like the legendary World’s Largest Ball of Twine,” (Cawker, Kansas) or maybe “Ben & Jerry’s Flavor Graveyard,” (Burlington, Vermont) or the not-to-be-missed “World’s Largest Bug Statue” in Providence, Rhode Island not to be confused with “Herkimer” the World’s Largest Beetle statue in Colorado. 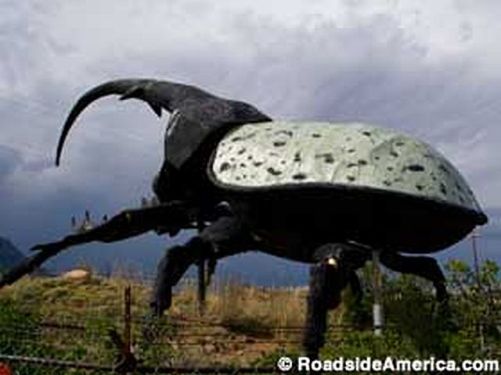 Anyone planning a road trip needs to visit RoadsideAmerica.com for a comprehensive listing of oddities along the route. Quality internet. Oh, this is “Herkimer,” the world’s largest beetle. Just so ya know.

On our recent jaunt into the Pacific Northwest, Max kept his eyes peeled to spot all things unusual and interesting. 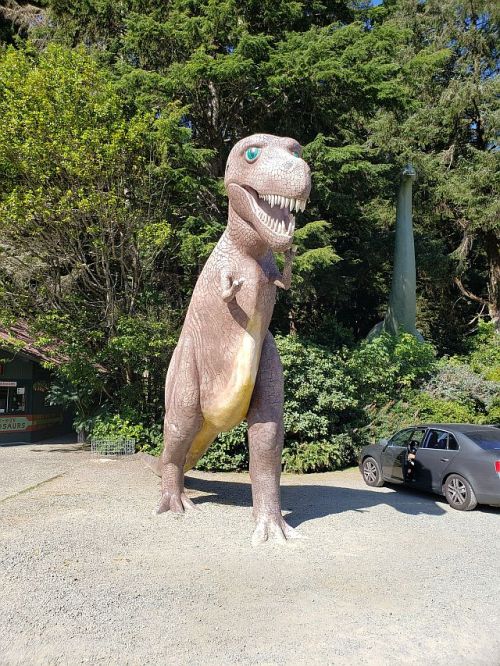 This dinosaur looks like the spawn of Godzilla and Barney.  The gentle green eyes are an especially fey touch.

We did see plenty of dinosaurs. Unfortunately, most were really, really badly done. This fellow in particular was a tragic mistake by an artist not very skilled in the depiction of over-sized lizards. 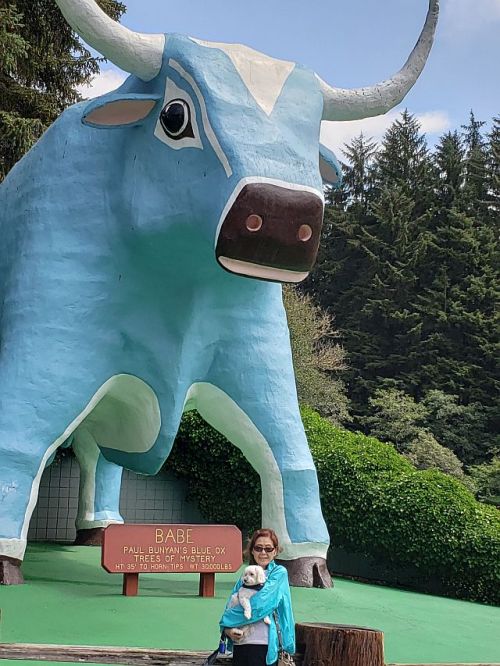 I should mention that Babe the Blue Ox is male. This statue is anatomically correct and complete. I tried to convince the AJF to take a photo while I pretended to hold up Babe’s, uh, gonads but she refused.

Who could pass up Paul Bunyan and his boon companion Babe the Blue Ox? Certainly not us. These towering statues are at a roadside attraction called Trees of Mystery which shall ever remain a mystery to us because the place was not dog friendly.

The giant Paul Bunyan statue has a head and hands that can be moved by radio signals from a remote operator. The operator can also talk to visitors through a two-way radio built into Paul’s giant noggin.

While we were there, a kid – perhaps 13 years old – was climbing on Paul Bunyan’s axe and taking selfies. The operator noticed the kid and asked through the big speaker “why are you touching my axe?”

Well, the speaker fidelity was rather poor or the kid misinterpreted the question. In response he shouted out – loud enough to get picked up on the speaker that broadcasted over the plaza – “I didn’t touch your ass, who’d want to touch your big fat ass?”

The Trees of Mystery visitors were amused and applauded loudly.

Can’t forget Nessie who is the mythical beast beneath the placid harbor waters in Yaquina Bay, Oregon. Look carefully and you can see Big Foot or Sasquatch or Big Squat or whomever next to Nessie at the world famous Yo Ho Ho Bounce House.

Nessie? That sounds like cultural appropriation to me. Somebody call Loch Ness.

Once you get up in Big Trees country there are all sorts of wood carvings, most seemingly done by chainsaw. Everything from cigar-holding Native Americans to eagles and bears of all types and sizes. On the coast, seals and walrus carvings abound. 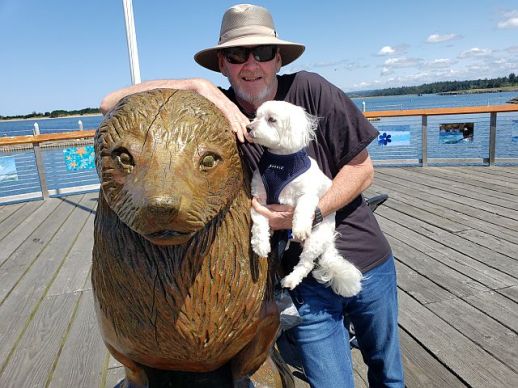 Max wonders a) what is this thing and b) why is he being held next to it.

Crabs are popular, too. This big crustacean is on the wharf at Bandon, Oregon. Those people on the pier behind the AJF are crabbing. Most all bagged at least one fat Dungeness crab that the pier operators would cook on request. 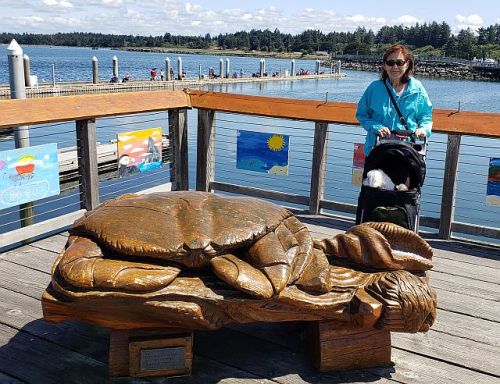 I was about to make a crab comment that would have cost me a night on the sofa. So I won’t make it.

Sometimes it’s just fun to stop and take quick photo. Max usually draws attention from fellow travelers and it’s typical for strangers to ask to pet the Malt which he likes a great deal.

What surprised us was that after our photo was taken, a couple of families thought it would be fun to borrow our dog and have him in their pictures, too. Who wants a strange dog in a family photo? Tourists, sheesh.

Had we known he’d be so popular, we would have charged a fee.

The one in the back is a grizzly. The one behind him is a bear. :snorf: