Max was not looking forward to having his Christmas photo taken. I don’t think he liked the costume that we chose for him.

What’s not to like? The costume had it all: reindeer horns, Santa suit, miniature Santa doll pasted on the butt and…booties!

Manufactured by Chinese workers who really care, the product came with instructions.

“The dog will probably not used.” Perhaps this works better in the native language.

No, seriously, who could object to comfy, warm booties with…and I’m not kidding…non-slip soles! 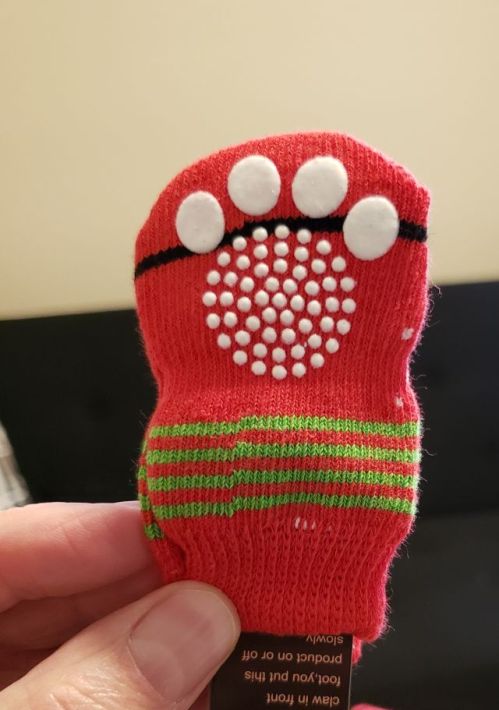 Just like the kind you get in better hospitals.

The first challenge was catching Max. Even the promise of tasty Milk Bones was not enough to convince him to stand still. The wily Malt has been through this exercise before.

With the Alpha Japanese Female blocking the hallway, I was able to capture the angry and elusive little animal and brute force him into his happy holiday outfit. It didn’t start well.

We might have pulled the hood a little too forward.

Several tries were made at adjusting the reindeer horns but they simply refused to stand up like in the photo we saw on Amazon. When the horns were upright, the rest of the hat was off kilter.

We weren’t ready to give up and surrender. A little tugging here, a little smoothing there and a little adjusting overall and…we failed again.

“What are you doing to me?”

It was obvious that Max was simply going to resist this costume to his dying breath. We managed to put on two of his booties. With that, we all declared victory.

We may have traumatized the fur monster. He now walks around with a stunned look on his little humbug face. 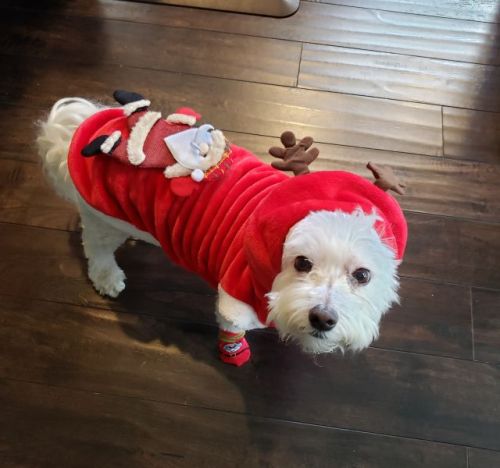 “I trusted you and you did this to me.”

He’ll survive. Later, I’ll tell him how lucky he is to have a warm outfit with non-slip booties when so many dogs have only their pride and dignity.

To all of you who have followed the antics of this gentle little white dog over the past year, we three wish for you a very happy Christmas, a joyous Chanukah or whatever holiday you celebrate.

We wish you peace, humor and more luck than you’ll need. For those who are ill we wish recovery and respite from pain. Milk bones to our canine friends.

Later on tonight,  I will raise a glass to you and together with Max and the AJF, I will wish you Merry Christmas.

Tom, the AJF and Max