Folks have been living in the Cayucos area since about 11,000 BC which is approximately the last time the AJF admitted I was right during any argument.

A great stop-off point along the coast between Southern and Northern California.

The early inhabitants were Chumash Indians. They were there for the fish, abalone and other critters in the lush kelp beds just offshore.

The Spanish explorers visited Cayucos in the mid-1700s and it became part of a Spanish land grant in the following century.

But it was a New England sailing captain who put the town on modern maps when he sailed around the Horn and landed there in 1867.

Captain James Cass quickly noted that Cayucos (the name comes from the Chumash language meaning kayak or canoe) was well-suited for growing fruit, dairying, berries, farming, alfalfa and beans and the topology of the area made it a good shipping port for cheese, hides, beef and fresh water.

But that’s not why the Malt was interested in visiting Cayucos. Nope, there was a more important reason. You see, among its many other delightful attributes Cayucos also boasts of being the most dog friendly town on the California coast. 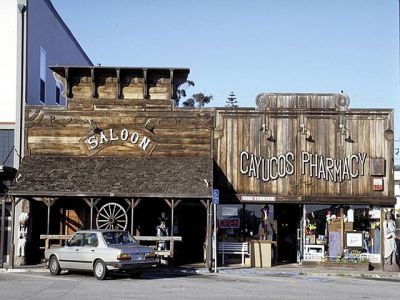 Downtown Cayucos. Guess what? I found a saloon!

It starts with a beach that is not only dog accessible but which is leash-free its entire length.

Then there are the many dog friendly motels, most of which have retained a throwback ambiance that resonates of the Old West or at least the 1960s.

No…In Cayucos, the restaurants welcome dogs and compete for their trade with canine menus.

The businesses up and down the short main drag set out water bowls on the sidewalks and allow pups to come in and browse.

The Sea Shanty has pretty good fish and chowder and welcomes dogs on the outside decks and patios.

As you might expect, there are lots of dogs in Cayucos.

His Furriness visited Cayucos last month while we were driving the coast route north, ultimately to visit family in Sacramento. We planned the overnighter at Cayucos to break up the long drive and personally sample the dog friendly atmosphere.

The little seaside town of Cayucos and the location of the Cayucos Motel not to be confused with the Georges V. The pier, originally built in the late 1800s,  is the hub of town activities.

Our lodgings were at the Cayucos Motel, a seven room facility straight out of a Gidget movie. Quick poll: who was the better Gidget? Sandra Dee or Sally Fields?

The correct answer is, of course, Sandra Dee. I heard Sally felt so inadequate as Gidget that she ran away and joined a flying Nunnery.

The color scheme at the Cayucos Motel is turquoise and lots of it.

The owner adores dogs and her tiny office is festooned with dog posters, dog knick-knacks, and signs detailing the many reasons why dogs are better motel guests than humans.

When making reservations, which are mandatory as the place is always full, the desk asks your dog’s name and then uses that info to make a personalized water bowl chock full of toys and treats. 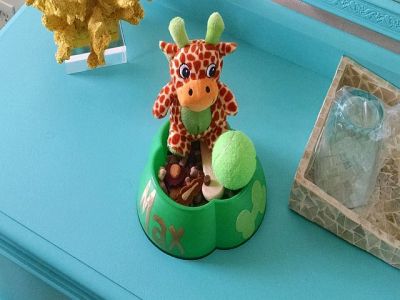 Max’s welcoming gift. He ignored the giraffe, we gave away the ball but he was very grateful for the treats and water dish. Note turquoise dresser.

No check-in at the Cayucos Motel is complete without a lot of fussing over the four-legger, which Max absolutely loved.

Max’s digs were about 25 steps away from a wide sandy beach that stretched a mile or two in either direction.

The beach had a fair amount of flotsam and/or jetsam washed ashore including body parts of various sea creatures which were irresistible to the Malt.

The kelp floats, dead crabs and mystery sea corpses were enticing too and demanded an energetic roll-over and wallow. We knew we were in trouble when we first spotted an odoriferous, unidentifiable carcass in the distance.

Suffice to say the Malt was disgusting. Fortunately, the motel had an outside pet shower and bath. I could swear he had a huge Maltese smile on his repellent little face the whole time we were scrubbing and scrubbing.

After that long beach walk and the horror of the Malt’s beach roll, we sat on the motel’s lawn, sipped a couple of canned adult beverages and watched the sunset whilst the newly clean Fuzzbutt explored the landscaping and greeted other motel guests.

Then, it was off to dinner for all three of us.

California law restricts pets to outside eating areas but most of the restaurants in town have large patios, some with ocean views.

When we arrived, Max was given a bowl of water and a pad to sit on under the table. With an infrared propane heater nearby, the outside seating was very comfy. Fish dinner for three!

Later we strolled around the little town, stopped by the cookie store, and then retired expecting to hear barking since all seven motel rooms had at least one dog but we were surprised that the night was silent. Perhaps all the Furballs were exhausted from their beach romps.

The next morning we were up early and departed Cayucos wishing we could have had more time there and promising a return.

Max agreed wholeheartedly. Especially the part about rolling around in the sand and fish guts.

Let’s do it again.