After visiting Zion National Park and catching up on the happenings in our former home near St. George, Utah we packed up and headed out for Durango, Colorado.

This was the longest single drive of our road trip: a 414 mile run that took almost seven hours, even with my over-sized right foot heavy on the accelerator of the Mighty Mazda. 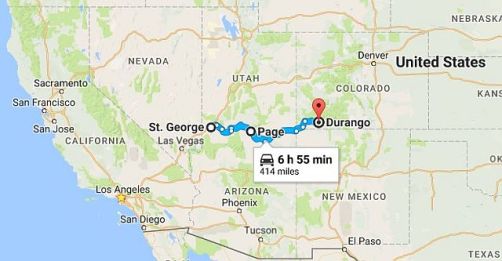 This was test of butt endurance: mine, hers and his.

There are many interesting places between St. George and Durango. Canyons, amazing landscapes, historical sites, polygamist towns and Native American places of interest.

Years ago we traveled extensively through this area but this is a tough and unforgiving region with flinty soils, no water, no grass and very high temperatures – wholly unsuitable for a pampered pooch.

After an early departure, we stopped at Lake Powell for a quick picnic lunch, a pee stop for you-know-who (and Max, too). Then, we crossed the Glen Canyon Dam and transited the harsh, seemingly endless Navajo lands of northern Arizona.

This was the monsoon season and late afternoon brought enormous cumulus clouds forming over the desert to heights above 50,000 feet, darkening ominously and then erupting in jagged lightning strikes and furious rain drops the size of small eggs. 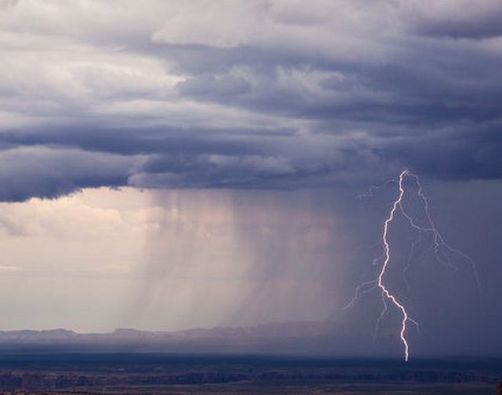 Late afternoon monsoon thunderstorm in the Navajo Nation. Look, there’s a DeLorean with a 1.21 gigawatts flux capacitor at the end of the lightning bolt!

The AJF  expressed her appreciation of Nature’s glory with a Japanese accent: “Horry Shit!” I covered Max’s tender ears.

We pulled into Durango about 4:30 and quickly located our humble lodgings. As you can see, the poor Malt was again abused by being forced into accommodations below his usual standard. 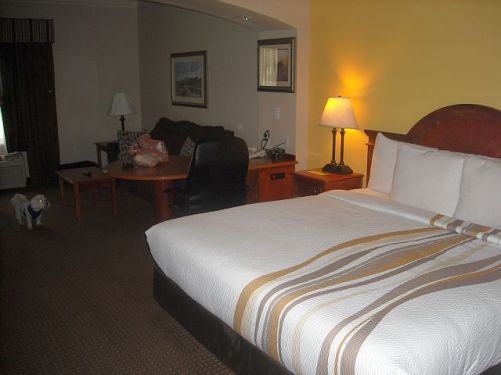 Why are the Malt’s eyes glowing? He was thrilled to get out of the car.

After such a punishing trip, clearly the driver deserved a nice back rub and fine dining, but neither appeared forthcoming from the other  two cold-hearted travelers. Sigh. So we opted for take out pizza and beer.

Next day, we played tourist around the city of Durango. 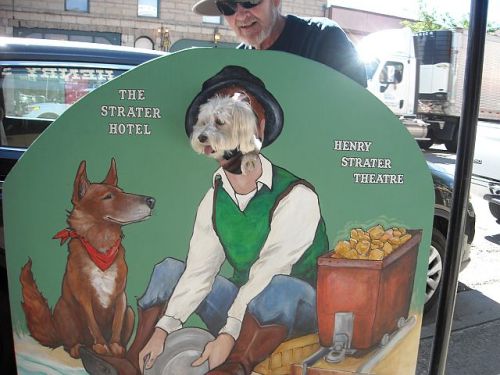 There is no limit to what we will do to embarrass the dog.

The Denver and Rio Grande Railroad Company formed Durango along the banks of the Animas River in September 1880 to serve miners in Colorado’s San Juan mountains. The word “Durango” originates from the Basque word “Urango” meaning “water town” or “well watered place,” an important element for operating the smelters to pull precious metals out of the ore. The town is a sister city to two other towns of the same name, one in Mexico and one in Spain. 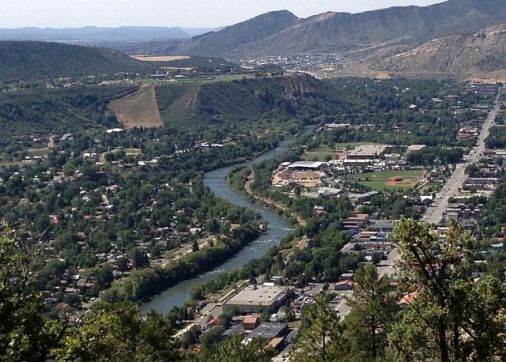 Native Americans had camped along the Animas River for thousands of years. Archaeologists have found evidence that this area experienced a population boom in the latter part of the 8th century. Some think more people lived in Durango then than now. Spanish explorers traipsed about this area in the mid-1700s.

Mining was a big deal in Durango until about 1900 when tourism eclipsed it as the major revenue source. There are about 18,000 full-time residents now. As the prime tourism center in southwest Colorado, the town has all the usual amenities plus a lot of charm, history and micro-breweries. That last one is important. 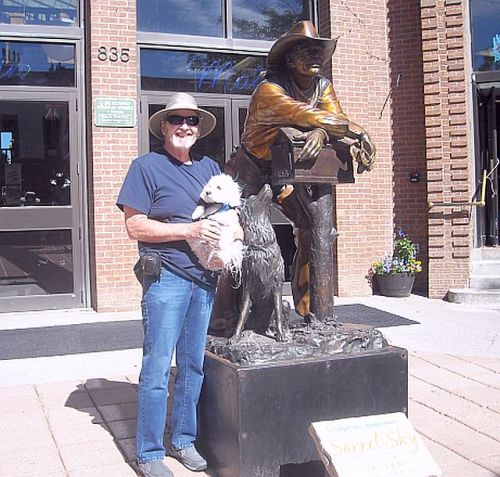 For lunch we went north about 10 miles to the James Ranch. The Ranch describes its offerings as follows:

So basically, your common or garden variety of LA eatery but with cows. I felt healthier just reading the menu. I will admit that they make a mean burger with all that natural and organic stuff. 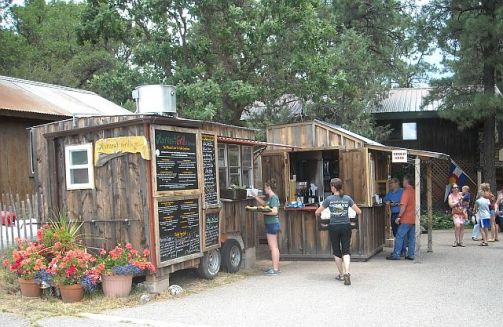 The Harvest Grille at James Ranch. Why they use the extra “l” and “e” is not clear. They also have a small Food Shoppe, er, market.

Max loved the Ranch because it offers large, grassy areas where dogs are welcome. He got to meet some goats, chickens and other critters, gobble some beef and roll around in the meadows. 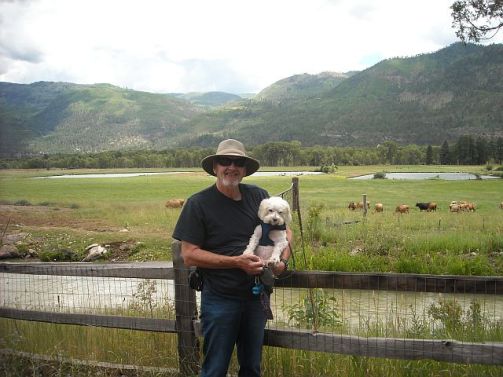 After lunch we explored the James Ranch and apologized to the cows for eating their family members.

After lunch it was off for more sightseeing to the surrounding lakes and villages and then back to Durango for aperitifs and, later, a continuation of our carnivorous behavior with a big feed at a restaurant called “Serious Texas BBQ.”

It wasn’t long before our eyes started drooping and we hit the hay as they say in these cowboy towns. 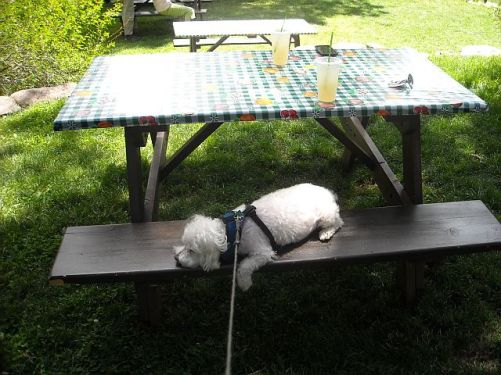 The well-fed Malt had a hard time staying awake.

Our next destination was the high country of southwest Colorado.